SEVEN: The Days Long Gone for PC is a game developed by Fool's Theory. Although it is the first project of the Polish developer, some of the team members formerly worked on such acclaimed titles as The Witcher 2: Assassins of Kings, The Witcher 3: Wild Hunt or Kholat. IMGN.PRO took care of the publishing, having already released American Truck Simulator and Spintires, among others.

SEVEN: The Days Long Gone for PC is set in the Empire of Vethrall  a world power born from the ashes of an old civilization that took a large step backwards about a thousand years earlier, instead of developing further. However, the circumstances of this event remain misterious. The player is put in the shoes of Teriel  both a henchman and a skilled thief taking different assignments. One of these quests brings the protagonist to the island of Peh, which is also a penal colony. A series of events the player participates in begins here.

The game is an action-RPG played from an isometric view and set in a post-apocalyptic world. SEVEN stands out with an interesting game world, which resembles the medieval period in its stylistics, but also contains elements of advanced technologies - these are considered remnants of the old civilization. The protagonist himself is not a typical hero as well: during his journey, he is constantly accompanied by Artanak - a demon residing within the character. As a result, Teriel gains access to a set of unique abilities based on the senses of the being concealed within the protagonist. Thus Teriel is able to know a guard's range of sight. He is also capable to slow down or accelerate the passage of time, for instance.

Teriel is a thief, thus the game does not feature any division into character classes - the protagonist can develop in one single way. Obviously, it affects the gameplay itself, resulting in a stealth-action experience in many aspects. The player moves across rooftops silently, sneaking past guards and wearing different disguises. When necessary, attacking by surprise is also an option. It is not an easy game however, for both the game world and its inhabitants are subjects to changing weather conditions and a time cycle. For example, when it rains, water pools appear on the ground. Stepping into one makes a noise which can alert the nearby guards.

Contrary to other games belonging to the genre, SEVEN offers open, multi-leveled locations and an environment reflecting the player's actions. The developer gives a set of abilities to the players - using these for different purposes is entirely up to them. The in-game levels were divided into zones and the player is capable of travelling from one to another freely, as long as they have a visa - it can be stolen or acquired during a mission. Without the visa, the player is required to face numerous difficulties, such as having to avoid guards for example. Apart from that, the players can try different tricks, losing a group of enemies who chase the protagonist in crowds of citizens who may not be happy about seeing the guards running around their neighborhoods. All of this means that particular quests can be approached in multiple ways.

SEVEN: The Days Long Gone for PC stands out particularly with its level design. The game simply makes a good impression in terms of the visuals. SEVEN utilizes Unreal Engine 4 - a technology used in production of such games as Adr1ft, ARK: Survival Evolved or Final Fantasy VII Remake.

This is an unofficial guide to Seven: The Days Long Gone. It contains all the information you need to get your head around the game’s basics, full walkthrough of main and side quest and many useful tips. 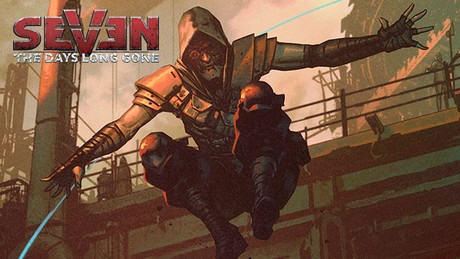 The last several years have seen an abundance of classic isometric RPGs. IMGN.PRO went a step further and based their work on a unique setting and movement mechanics that resemble Mirrors Edge rather than Baldurs Gate.

The Witcher 3 and Kholat Devs Are Working on Seven, an Innovative Isometric RPG

IMGN.PRO have shared a short gameplay demo from the upcoming SEVEN: The Days Long Gone. There are elements of parkour, some sneaking and goodness, poor AI?

In case you didn't know, SEVEN: The Days Long Gone is a post-apocalyptic, isometric RPG in works by former Witcher 3 developers. Trust me, you won't regret watching its new trailer.

Seven: The Days Long Gone  stealth action RPG game from the Fool's Theory will have an expanded version. It will be released on March 26, this year on PC and PlayStation 4.

Polish studio 11 bit announced their publishing plans for the near future. The company will help to publish and finance two more projects. One of them will be a new RPG created the team at Fool's Theory, responsible for the 2017 RPG Seven: The Days Long Gone.