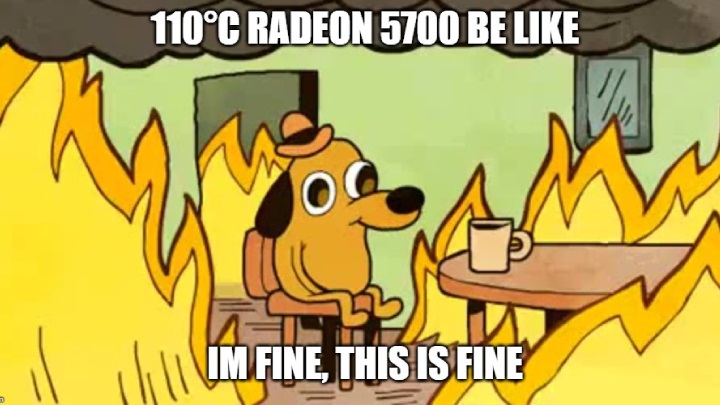 AMD has recently published an entry on its blog, from which we can learn a little bit about the operating temperatures of the Navi family of GPUs. This came in response to users' concerns about the temperatures of the new GPUs, which can reach up to 110 degrees Celsius (that's around 230 degrees Fahrenheit). This value is much higher than 95 degrees, which were reached by earlier models.

Starting with Radeon VII, AMD has changed the method of temperature measurement in its systems. In the past, GPUs were equipped with single temperature sensors that determined the supply voltage and frequency. In Radeon VII and new Navi models it looks quite different - they are equipped with a network of sensors that collect information in different locations and use AVFS mechanism, similar to that of Ryzen processors.

AVFS (Adaptive Voltage and Frequency Scaling) is a mechanism that uses a network of temperature sensors inside the system to dynamically control the voltages of the individual cores and achieve the desired timing. With this type of energy management model, it is possible to achieve higher efficiency and reduce energy consumption.

AMD has prepared the following graphics to visualize the differences in the performance of the "conservative" Vega and Navi dynamic chipset. The previous generation GPUs were characterised by pre-set voltage levels and, when the limit temperature was reached, the voltage was lowered evenly throughout the chip. The new chips react dynamically and only slow down when they reach 110 degrees, making the graph a nice curve.

This is how the bound timing of Vega systems looks like.

This is how dynamic voltage adjustment in Navi looks like.

Get out of there, it's gonna blow!

It seems that the fact that the systems reach a temperature of around 110 degrees Celsius is not a symptom announcing an imminent end of the system. The information provided by AMD also shows that the previous GPUs were not necessarily much "cooler", and the new measurement method simply allows for a more accurate control of temperatures at "hot spots". The RX 5700 and 5700 XT Radeons are therefore designed to reach their full potential right from the start.

However, the very thought of such high temperatures can be scary, since 110 degrees seems to be a dangerously high value and allows us to think that cooling will be very loud. AMD argues, however, that this is not the case, and the new cards are much quieter than the Vega family.

Higher temperatures are not only a matter of more accurate measurements, but also of technological progress, which allows for denser packing of transistors in chipsets. Despite the lower operating voltage, more densely packed chipsets heat up more heat at individual points. AVFS allows the system to react better to the emergence of hot spots, but this does not change the fact that there are more and more heat-generating transistors in less and less space. However, leading manufacturers already have ways to produce chips that can work reliably at temperatures above 95 degrees Celsius, which until some time ago was basically unthinkable.