You still have to spend a lot of cash on a GPU. It's not as bad as it was in Q2, but prices are rising again and this trend may continue for the rest of the year.

Where Have the GPUs Gone? Footage From Dubai Gives a Hint

There is a shortage of graphics cards on the market, and their prices are shocking. Where have AMD Radeon RX chip shipments disappeared to?

Nvidia strengthened its position as the leader of the GPU market in the second quarter of 2021. AMD lost the most.

The release of new Nvidia and AMD graphics cards is still ahead of us, but rumors about the power consumption of GPUs of the upcoming generation have appeared on the web. We don't have good news.

 Amazing gaming at 1080p resolution. Such a slogan is advertising the AMD's new GPU model, the Radeon RX 6600XT. It is supposed to be the answer to the RTX 3060 from Nvidia.

More clues have emerged about AMD's plans for cryptocurrencies. The company is allegedly preparing new GPU model designed for miners.

AMD With Record Earnings in 2020

AMD reported strong revenue increase in 2020. The emphasis on remote working and the resulting high demand for electronics are the effects of the on-going coronavirus pandemic.

We Know the Reason for GPU Shortages

Why can't we buy graphics cards? Igor Wallossek, well-known hardware guru, investigated the matter and has reached some interesting conclusions.

The new GPUs offer much better performance than the previous generation, only unfortunately it's hard to experience that in person. Both the new RTX 3000 and Radeon RX 6000 are hard to find in stores. How do their manufacturers explain this fact?

Radeon 6800 and 6800 XT Availability May be Severely Limited

Asus has reported that interest in the Radeon RX 6800 and 6800 XT cards is much greater than AMD's deliveries. So we may have another imaginary launch.

The launch of new generation of AMD hardware is approaching. The manufacturer wants to implement measures to ensure the availability of RX 6000 GPUs and Ryzen 5000 CPUs.

A representative of AMD's new GPU line, the Radeon RX 6000, was presented on more pictures. It is highly probable that we are dealing with a top-of-the-line chipset.

AMD revealed the appearance of a new series of GPUs - Radeon RX 6000. The presentation was quite unusual - the chipset was presented in Fortnite.

AMD has announced the dates of two conferences to showcase new hardware. On October 8 we will see the processors and 20 days later the GPUs.

A marketing specialist informs on AMD blog how the amount of memory on the GPU affects the performance of video games. He says that 4GB may no longer be enough to run some games in maximum details.

A leaks suggest that the upcoming AMD cards will be much more efficient than their predecessors. The new Radeons are also expected to offer ray tracing support.

Hardware Unboxed conducted a benchmark of older GPUs in Doom Eternal. It turned out that AMD chipsets are winning against equally aged GeForce, and the 2012 Radeon HD 7970 performs better than its much younger competitors.

AMD has decided to change cooling in the new generation 2 RDNA-based graphics cards. Things are to become quieter and much cooler from now on.

The new version of Radeon Software Adrenalin 2020 Edition (20.2.2) drivers fixes some of the problems recently faced by AMD GPU users. Unfortunately, freezing can still occur in some cases.

Radeon owners should update their graphics card drivers as soon as possible. AMD Adrenalin 20.1.1, although not mentioned in the manufacturer's list of changes, addresses four major security gaps.

The offer of one of the German store includes PC sets equipped with Radeon RX 5300 XT GPU and B550 chipset (supposedly supporting PCIe 4.0). Both configurations will reach consumers in October.

The first details about the new Radeon GPU from AMD, have appeared in the web. The chipsets will have, among others, a very fast HBM2E memory and hardware ray tracing support.

AMD is Preparing Navi 14 Budget GPU - Will it be the Successor of Radeon RX 570?

From the information that appeared in the Compubench database, we learned that AMD is working on three mysterious graphics cards based on Navi 14. Everything indicates that we will see the successors of cheaper cards from the Polaris family.

AMD has addressed users' concerns about the high temperatures reached by the Radeon RX 5700 and 5700 XT cards. According to the manufacturer, new systems are adapted to operate at this temperature, and higher measurements are partly due to increased accuracy.

There are rumors on the web that AMD is working on cards to dethrone Nvidia chipsets. The GPU in question is to represent the Navi 23 family, support hardware ray tracing and debut on the market next year.

Two designer Radeon RX 5700 XT models have appeared in pre-order in the Overclocking UK store. These are versions with cooling from ASUS and Sapphire companies.

During the Computex 2019 conference, AMD announced the Radeon RX 5000 line of graphics cards. The first product of this type will be the Radeon RX 5700, which will debut in July. More information about the new designs will be available in a few weeks.

It looks like the GPUs used by Google's Stadia servers will be the first-generation AMD Vega GPU. At least that is what we know from information published by Khronos, who is responsible for the development of the Vulcan API.

AMD has announced the "Next Horizon Gaming" event, which will take place during the E3. There are many indications that during the conference, for the first time, we will see new graphics cards based on Navi architecture.

Interesting information about the possible launch of new AMD GPUs from the Radeon RX 600 family has surfaced on the Internet. The news comes from the data contained in the latest GPU driver distribution. 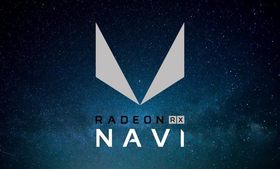 TweakTown reports that AMD is planning to present Navi-family graphics cards during this year's E3. Rumors also suggest when then new GPU will be available on the market.

Jon Peddie Research analytics has summarized Q4 2018 on the so-called discrete GPU market, external GPU installed in PCs and laptops. AMD has had a weaker period, during which the company lost much of its share in the market.

The cryptocurrency fad keeps leaving a bad aftertaste in the mouths of GPU manufacturers. According to the independent analytics company Jon Peddie Research, Nvidia and AMD will have to deal with a lasting oversupply of their graphics cards.

According to a rumor spreading on Bits and Chips Twitter, AMD intends to lower the prices of Radeon RX 580 and RX 590 chipsets in the coming weeks.

First reviews of AMD's new 7nm design, Radeon VII, have surfaced on the web. Is the chipset truly as efficient as it was advertised?. We have prepared for you a summary of benchmarks performed by the experts.

A little more than a week is left until Radeon 7's official release, and a new portion of benchmarks has just appeared on the Internet.

AMD has denied the gossip about Radeon VII's limited availability. Demand is supposed to match supply  players who will be interested in purchasing a new graphics card will be able to do so.

Very interesting, albeit unofficial information comes to us from the AMD headquarters  a lot indicates that the GPUs presented a few days ago will reach the market in a very limited quantity.

During yesterday's conference at CES 2019 AMD presented its latest layout, Radeon VII. The head of Nvidia, Jen-Hsen Huang, also spoke about the GPU and criticized the latest red camp proposal.

AMD has unveiled its latest graphics card, Radeon VII. The first 7 nm lithographic gaming card will make its debut next month and is set to fight against the competitive GeForce RTX 2080.

Everybody's Gone to the Rapture PC was listed among the supported games in AMD's new driver patch notes. However, there is still no official confirmation of the news.

AMD has released the latest drivers marked with number 15.3. AMD Freesync technology support is the most important new addition. Of course, features such as new Crossfire profiles were also included, and various bugs were fixed.