Eidos Montreal has announced that it is switching to a four-day work week with no pay cut. The team's credits include Deus Ex: Human Revolution, Deus Ex: Mankind Divided and Shadow of the Tomb Raider, and it is currently working on Marvel's Guardians of the Galaxy. The same changes will be made in the Eidos-Sherbrooke division, which supports Square Enix developers in technological matters.

Importantly, eight-hour working hours will be maintained. Thus, people from Eidos Montreal and Eidos-Sherbrooke will work 32 hours a week, instead of 40 as before. This is significant, as the transition to a four-day mode could also be accomplished by requiring developers to work four 10-hour shifts per week.

The studios' bosses explain the change not only by caring for the health of their employees and wanting to give them a better work-life balance. It is also supposed to have an impact on work quality by increasing creativity and productivity of teams and reducing the loss of experienced developers due to burnout, which is a huge problem in this industry.

According to Jason Schreier, Eidos Montreal is the first team specializing in AAA games to decide on such a step. The journalist explains that the move also makes sense because of the local situation of this developer. Montreal is home to a slew of big studios and the competition for the best employees is fierce. 32-hour work weeks should prove to be quite an incentive for many of them. 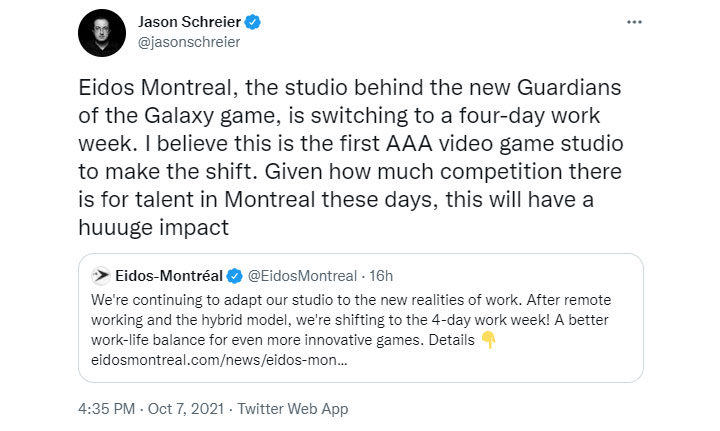 Guardians of The Galaxy will be released on October 26 on PC, PlayStation 4, Xbox One, PlayStation 5 and Xbox Series X/S.

Play at Home Reported as Success for Sony; Players Downloaded a Total of 60 Million Games