The shooter Apex Legend broke another popularity record on Steam. According to SteamCharts stats, on January 30 - at the best moment of the day - Respawn Entertainment's game was played simultaneously by nearly 130 thousand people (129,928 to be exact). We must admit that this is an impressive result. 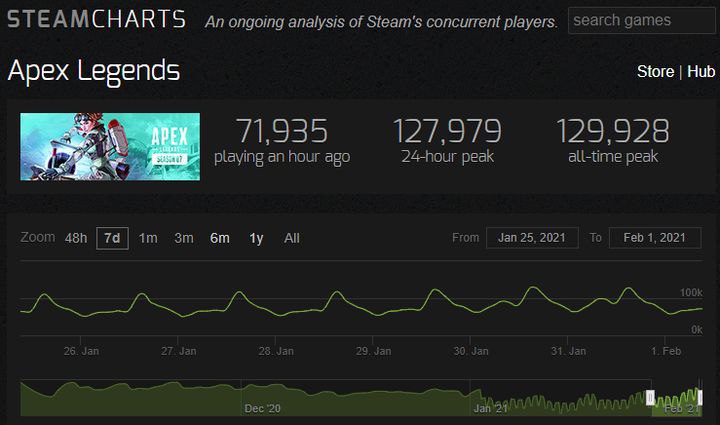 What's more, in the coming days this result may improve even further, because tomorrow marks the launch of season 8. We will receive a new hero (Fuse), as well as another weapon (30-30 Repeater rifle). In addition, the first map from Apex Legends - Kings Canyon - will return in a changed form.

Everything indicates that soon we should also receive some details about the Apex Legends version dedicated to the hybrid platform Nintendo Switch. A recent leak even suggests that this edition will debut along with the launch of the season 8 (however, this is not confirmed).

There are also versions dedicated to mobile devices in the pipeline, but they will most likely not be released until later this year.

The popularity of Apex Legends prompted the publisher - Electronic Arts - to expand the universe in other media, such as books. This week, the Dark Horse publishing house will release a publication titled Pathfinder's Quest. It will be the so-called lore book, presenting various details about the universe (it's worth remembering that AL is a spin-off to the Titanfall series).