Mount & Blade II: Bannerlord debuted in early access last March. Since then, the creators from TaleWords have been working intensly on developing their game, releasing new updates every now and then. The next Development Update video published on YouTube details the changes that will soon be implemented in the game - lbeginning with new terrain system and the duel mode.

The most interesting novelty will probably be the last of the mentioned things, the so-called Duel Mode. Players will be able to join the server, which will enable them to duel other users. To win the duel, we will have to win three rounds. We'll be able to choose weapons and decide whether we want to fight on foot or on horseback. What's important, our results will be compared with the results of others on a special scoreboard, so everyone will know who is the best.

The developers have also announced a classic sandbox mode, which will enable us to enjoy the gameplay more tailored to our expectations and without the main storyline.

There is also a big change planned in the system responsible for generating terrain in battles. The map will be divided into dozens of regions, which will be associated with a specific type of terrain. The game will also take into account the specifics of a particular place (e.g. presence of rivers or the sea) and where all parties of the conflict are located. The effect is to be a much better connection of three-dimensional battle with the nearby points on the world map. 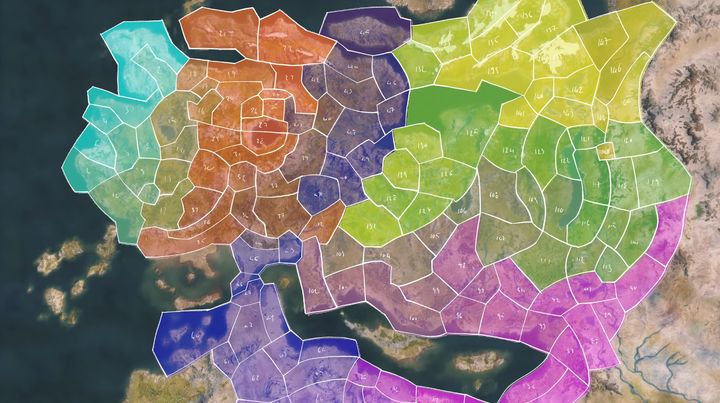 The map will be divided into dozens of regions. Source: https://www.youtube.com/watch?v=lQse5KhT1Ng&feature=emb_title

Bannerlord will receive six new siege maps, with four of them representing cities and two representing castles. We will also get new Pillage and Devastate options, which we can use in conquered strongholds or cities. The first of them will enable us to gain additional money, while the second will improve the morale of our soldiers.

In addition, the game will also feature nine new helmets inspired by Celtic weaponry and a more elaborate character creator that will enable us to customize, for example, the weight and body shape of the character (we'll be able to use it both in the story campaign and the sandbox mode). Those with Nvidia graphics cards will probably also enjoy DLSS 2.0 support.