Just yesterday, reports surfaced from Tom Henderson that pointed out the problems Battlefield 2042 was facing. According to his sources, the company executives in charge of the game's development didn't have a coherent vision of what the game was actually supposed to be. Among the inspirations was the latest installment of CoD: Modern Warfare, which did not make longtime fans of DICE's series happy.

However, it looks like it could have been a lot worse. Before returning to the vision of a classic Battlefield the new game was rumored to be a battle royale title. Henderson revealed on Twitter that the game originally drew inspiration from Apex Legends and it was to offer this type of gameplay. However, he does not know at what stage of work it was decided to change the direction. 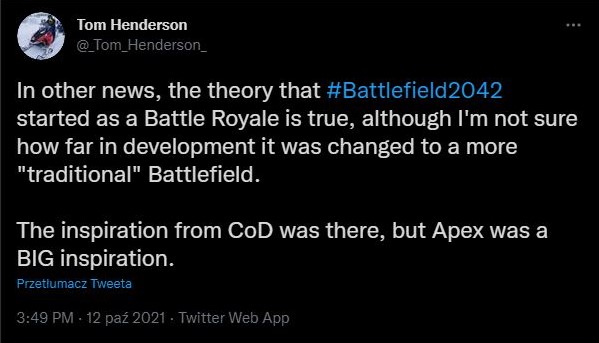 It's possible that it was this type of radical concept change that caused the problems within DICE. In this case, however, it's hard not to agree that a better decision was made. The announcement of the new Battlefield being a battle royale could have caused a firestorm even bigger than the first trailer for Battlefield 5. It would also likely cause an image crisis from which the studio would find it difficult to recover.

Fortunately, that's in the past now, and Henderson himself admits that he doesn't know when the idea for the game changed. It's possible, therefore, that these were just initial, quickly abandoned plans. However, we can't rule out a scenario in which a change in the development direction occurred only after a longer period of time.

Of course, it should be noted at this point that this is unofficial information, not necessarily consistent with reality. However, Tom Henderson has a reliable record of leaks, which over time turned out to be true.

The final quality level of Battlefield 2042 will be revealed soon enough. The game's release is scheduled for November 19, this year. The game will debut on PC, PS4, PS5, Xbox One and Series S/X.

Crowds on Back 4 Blood Servers; Good Launch on Steam