A leak appeared on 4chan forum yesterday, which suggests that the plot of Cyberpunk 2077 is a ripoff from Fallout: New Vegas. According to the author of the entry, this is because of the chip installed in the main character's head, as well as the possibility of establishing cooperation with individual factions and gangs. The endings were also supposed to be similar. The source of information was supposedly a review copy of the game. 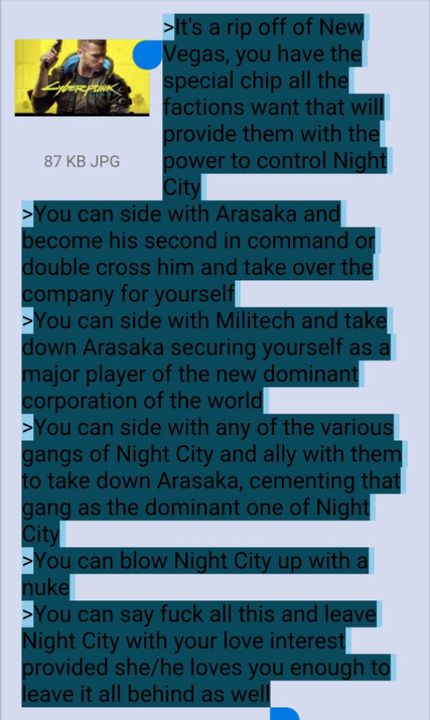 The developers at CD Projekt RED referred to these revelations in a Twitter post, explicitly denying the "leak". By the way, we found out that the developers haven't sent copies of the game to the reviewers yet - so for now, you can safely ignore all "spoilers" based on them and the leaks.

Cyberpunk 2077 will debut on November 19, 2020. The game will be available on PC, Google Stadia, as well as PlayStation 4 and Xbox One. Thanks to backwards compatibility, the game will also be playable on PlayStation 5 and Xbox Series X / S, and next year the developers will release an update to take advantage of the full power of 9th-gen hardware.