During today's stream dedicated to Cyberpunk 2077 the devs presented patch 1.5 and a small DLC. Apart from that, information about the improvements for Xbox Series X|S and PS5 consoles was revealed and a free trial period was announced. Most importantly, however, all the news can be downloaded now.

The broadcast brought us information on what will appear in Cyberpunk 2077 after update 1.5. The most important changes include:

There are also three small DLCs coming to the game. Their content is presented as follows:

Most of the new features have hit all available platforms. Some of the improvements, however, are not available on last-gen consoles. This is shown in detail in the graphic below. The full list of changes can be found here. 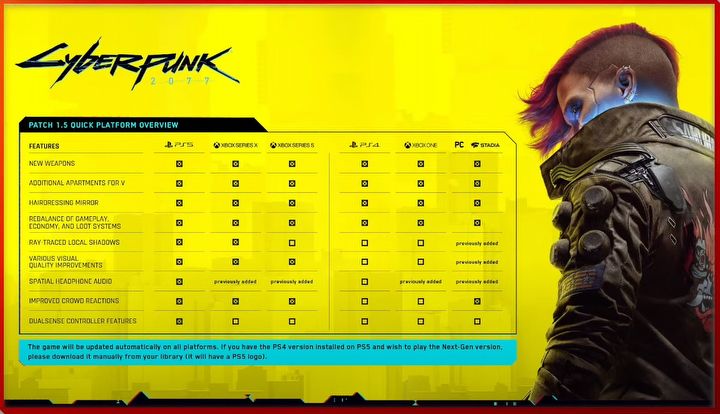 Size of the update

Patch 1.5 weighs a lot indeed. In the case of PC and Xbox consoles, we need to download around 50 GB of data. On the PS4, on the other hand, we will have to download as much as 99 GB. Keep in mind that the patch will be downloaded automatically on most platforms. Only on PS5 you have to do it manually by downloading an upgrade from the PS Store, which weighs about 55 GB.

Yesterday there were rumors that during the show we will ge to know the details of the update for Xbox X|S Series. As it turns out, they were true and during the broadcast a gameplay recording from Microsoft's console was presented. There was also gameplay from the PS5 version. Both videos can be viewed below.

At the same time it was announced that a free trial version has become available on next-gen consoles, enabling us to plaY Cyberpunk 2077 for 5 hours.

BioShock Will Get a Netflix Adaptation