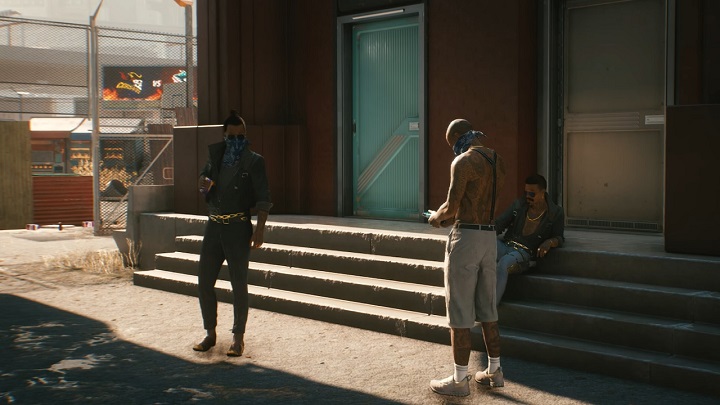 We met the gangs appearing in Cyberpunk 2077.

As part of today's Night City Wire stream, dedicated to Cyberpunk 2077, we were presented the gangs we will meet while traversing the corners of cyberpunk city and its surroundings. There will be a total of nine gangs, each characterized by a different style (of appearance or combat). Related to them will be extensive tasks showing more widely the fate and stories of their members. You can watche the gang presentation in Cyberpunk 2077 below.

Gangs operating in Night City have been reported before, but today's presentation has revealed some more details about them. First of all, we found out that due to the status of the main character, who is a mercenary, and because of what he does, we won't be able to simply join a chosen gang. However, of course, this will not prevent us from completing specific orders for them or acquiring themed clothing and weapons. Here are brief descriptions of each of the nine gangs.

Members of the Maelstrom gang are characterized by a fascination for various cyberware and improvements that make most of them less and less human-like. They are aggressive, often brutal and at the same time unpredictable. In one moment they can greet you like a friend, and wipe the floor with you a second later. They eliminate their enemies in a truly explosive and very specific way.

Members of the Maelstrom gang.

Valentinos, the Latin gang (although such nationality is not required to join the gang) has a clear goal - to seduce as many of the prettiest women in Night City as possible. Its members are generally not so aggressive and value honor and justice above all, but woe to those who stand in their way (i.e. mainly partners of targeted women). When it's necessary, they know how to use violence, and their number makes it necessary for others to take into account the gang.

Members of the Valentinos gang.

6th Street is a very characteristic gang, mainly represented by former American police members and veterans. Their main goal is to restore order and justice on the streets of Night City (on their own rules). To do this they are not afraid to use the ultimate means of violence. Their connection with the police enables them to get out of many trouble.

Animals are distinguished primarily by their brawn and physical strength. They use all available means which make them grow bigger and strike harder. Each of them strives to achieve the ideal (according to their standards) silhouette, and the they could fight only with their bare fists if they could. You can often meet them working as security guards or bouncers in clubs, but they are said to be secretly cooperating with the anti-crime group NetWatch.

Members of the Animals gang.

The Voodoo Boys try to discover the secrets of the Old Net and what is behind the so-called Blackwall. They are cyberspace and hacking specialists, thanks to which they can hack almost anything, and can quickly track who they want. They do not shy away from drugs and unusual rituals. Most of the gang members have a strong connection to the Haitian community, and they treat the district where they are based as their second home. But now they have to fight for their territory with another gang - the Animals.

The Japanese gang Tiger Claws controls the Japantown area and is one of the largest in the entire Night City. Its main goal is to maintain its own territory, so they often act on the defensive, although they are not afraid to use their strength in the eventual takeover of a competing gang's business. The members of Tiger Claws are extremely distinctive - their bodies are adorned with Asian tattoos and they enjoy using katanas and motorcycles. They used to rely heavily on martial arts in battle, but nowadays they don't refrain from using cyberware.

Members of the Tiger Claws gang.

The Mox is one of the youngest and smallest gangs in Night City, which was created in response to the death of Lizzie Borden (the owner of a strip club). They specialize in protecting prostitutes, pimps, and sexual minorities, among others, and simply make sure that none of its members are harmed.

Scavengers are a group of people who kidnap cyberware users and then rip it out to sell it on the black market. Gang members can be found scattered all over the Night City, as they are unlikely to form larger groups. Nevertheless, they raise fear in the locals, as they are ruthless and will do anything to earn money from the ware.

The Wraiths are the biggest gang on the outskirts of Night City. Its members belong to the Nomads, a group of outcasts living in the Badlands. They travel mainly at night, and then they rob unexpected victims in order to be able to sell the loot and still be able to live in the wilderness with the money they earn.

Members of the Wraiths gang.