An information appeared on Twitter, revealing that the embargo on reviews of Cyberpunk 2077 will be lifted on December 7 at 6 PM CET / 9 AM PT. It is worth noting that this is not an official, confirmed date, although it seems quite probable. If the information turns out to be true, it will also mean that we do not have to worry about yet another delay. 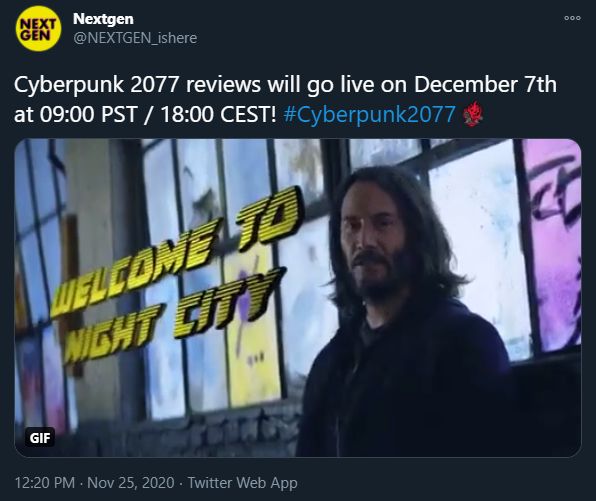 We would also like to remind that the information about expansions for the game will have to wait for a while - they will be revealed only after the launch, maybe at the beginning of next year.

"The initial plan was to do it before the launch, but after the last delay we decided to wait for the release, to give players the game first and then start talking about future projects. So, after the release of the game. (...) As I said, we are not focusing too much on talking about future products, those that are to be released after Cyberpunk. So please be with us in the first quarter of next year, when we plan to share some update on the strategy," said Adam Kicinski, CEO of CD Projekt during a recent investor call.

Everything seems to indicate that in about ten days we will finally find out whether it was worth waiting for CD Projekt RED's new work. Three days later the game will appear on the market and owners of PC, as well as old and current-gen consoles will be able to test it by themselves. All that remains is to wait and keep our fingers crossed.

Cyberpunk 2077 and Save Game Data Transfer Between Consoles

War Thunder Twitch Drops Are Back

Crypto Miners May be Responsible for RTX 3000 Shortages

Disney Has No Chill? Blooper in The Mandalorian Removed