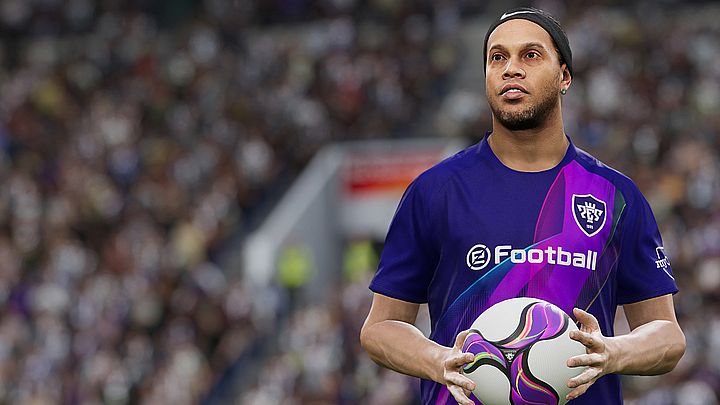 Ronaldinho is the king of football. Even if there are players better than him out there.

Konami does not lose momentum. When everyone got used to the fact that it is the football series from EA Sports that has the licenses for all clubs and leagues in the world, the Japanese took over the rights to Juventus Turin. As it turns out, there's more. Juventus was followed by the whole Italian Serie A (although it is worth mentioning that we are talking about logos and graphic signs, and not about all clubs). But the real bomb came out of nowhere (out of gamescom, to be precise... but still). On Twitter it was announced that eFootball PES 2020 will receive a ful licens of the European Championship tournament in the form of a free DLC, which will be available in the second quarter of 2020 and will offer 50 official national teams.

This is a big event, especially since the World and European Championships were previously the domain of Electronic Arts. Americans have repeatedly released separate editions of the series dedicated exclusively to major international tournaments. It is not clear how this will look like in the case of Konami and how long the agreement with UEFA has been signed for. Euro 2020 will be released in the Japanese production for free - just as it was with the World Cup update to FIFA 18.

Moreover, with theagreement between Konami and UEFA, a completely new eSports tournament has been announced, the eEuro2020 tournament. Of course, this is not to the taste of FIFA players who are used to the fact that it is "their" game that offers this type of events. We must admit that PES 2020 really has a chance to thumb the nose at EA Sports' series. The question is, will the great gameplay and still only a handful (compared to FIFA) of licenses be able to resist FUT and VOLTA modes? Unfortunately, I doubt that.

eFootball PES 2020 will go on sale on September 10, this year. The production will launch on PC, Xbox One and PlayStation 4. You can now check out the demo version of the game.