Although we still don't know when exactly we'll be able to officially travel to Spain and Portugal in Euro Truck Simulator 2 as part of the Iberia DLC, the Czech studio SCS Software keeps showing us smaller or larger materials presenting various aspects of the upcoming expansion. Recently, another gameplay video has been released, just over fifteen minutes long, showing a virtual journey through a fragment of the Iberian Peninsula. It was recorded by the head of the QA department at SCS Software. He used a TrackIR device to track head movements and recreate them in-game.

The gameplay footage alone is not the only interesting piece of news concerning the Iberia DLC for Euro Truck Simulator 2 that has recently appeared online. The Czech team also shared how Special Transport will work in the upcoming map expansion. As was the case with The Baltic Route and Road to the Black Sea, the developers have prepared new orders for transporting unusual loads in ETS 2 specifically with the Iberian Peninsula in mind. These will be available on five routes:

As promised, each of the new special assignments will put the virtual drivers' skills to the test. All owners of the Special Transport DLC who purchase the Iberia expansion will be able to test themselves in them. 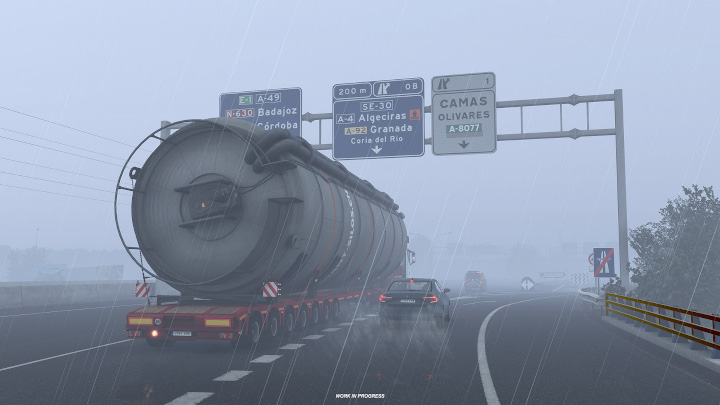 Such sights on the roads are unlikely to be an everyday occurrence.

Of course, there is more to come in the Spanish-Portuguese expansion for Euro Truck Simulator 2. SCS Software representatives promise to provide more information about it soon.

As a reminder, in addition to the Iberia DLC, patch 1.40 is also being prepared, which will improve the lighting system in Euro Truck Simulator 2. The beta version is available for testing now. Details can be found in this news.