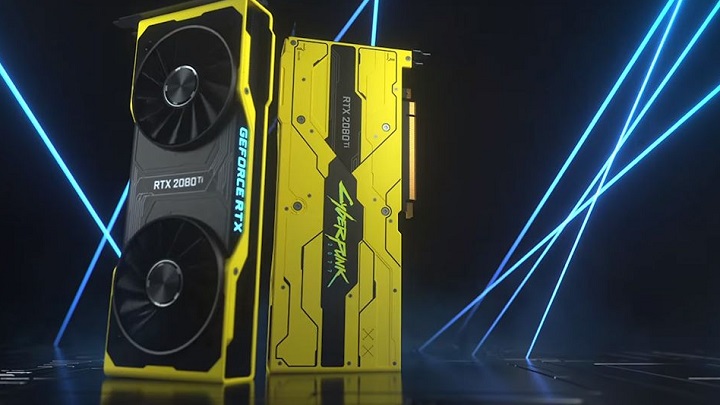 Nvidia's special card is a tasty morsel for (rich) collectors.

At the end of February we could see what the special version of Geforce RTX 2080 Ti card inspired by Cyberpunk 2077 really looks like. However, if you are not among the lucky winners of the Nvidia competition, you still have a chance to get the card... as long as you have a fat wallet. Some copies of GeForce RTX 2080 Ti Cyberpunk 2077 Edition have been auctioned on eBay at prices starting at $2,500. And this is one of the cheapest offers. Not counting one lucky guy from mid-March, most buyers paid over $3,000 for the card. Whereas the last auction ended last night with a bid of 5.2 thousand dollars.

Such amounts for a GPU are impressive, but definitely not surprising. Nvidia has manufactured less than 200 copies of GeForce RTX 2080 Ti Cyberpunk 2077 Edition and they are not on sale. So far, we were able to get them in a competition organized by the company at the beginning of the year (77 copies were distributed in this way). Add to this the great expectations of Cyberpunk 2077 and the prices at the auctions are definitely not surprising. The GPU itself also adds its value to this particular model. GeForce RTX 2080 Ti is not one of the cheapest cards on the market, and in the version with 11 GB of VRAMt costs well over $1000. So it is not so surprising that the prices for a unique version have went through the roof.

However, not all users let themselves be tempted by thousands of dollars lying on eBay. Some people didn't get rid of their copy, just like the anonymous winner of the Nvidia contest, who boasted of his acquisition in a photo sent to the company (see Twitter entry below). Others may be waiting for a further price increase with the upcoming release of Cyberpunk 2077, in which case they have plenty of time to think about the decision. The new game from CD Projekt RED will go on sale on September 17, almost six months after the originally planned release date. Let's hope that the devs will keep their word and the ongoing pandemic will not contribute to another delay.

PS5 DualSense Will have USB-C Connector and Headset Jack