For a few days now Forza Horizon 5 hasn't left the lips of gamers and the game's debut turned out to be the biggest release in Xbox Game Studios' history. Virtual drivers were captivated by the beautiful Mexico, filled to the brim with exotic cars. The latest exploit, however, could turn this landscape into a veritable World War II training ground. All thanks to the 1940 Jeep Willys MB.

As reported by WindowsCentral, players have discovered a way to gain an unlimited number of Super Wheelspin tokens. Here the thing: after buying Willys MB for 40 thousand credits and investing a minimum of five skill points in its perks, we get one guaranteed wheelspin token. The rewards from it - a 35% chance of winning another car, a 51.8% chance of getting a cash injection, and a 13.2% chance of getting a cosmetic item (according to Reddit user EgonThyPickle) - often far exceed the cost of buying a Jeep.

Many players accumulate Jeeps in their garages by hundreds. Some try to sell their "used" models in an auction house, and others give them to other virtual drivers - this is due to the new system of gifts, which enables us to give the vehicle of our choice to another person. At this point there is no way to refuse such a gift (once you get to the right place on the map to collect it). What's more, many players report that after such a procedure, the skill points spent on vehicle perks are returned. As a result, hundreds of memes have appeared in threads dedicated to the game, mocking the phenomenon in question: 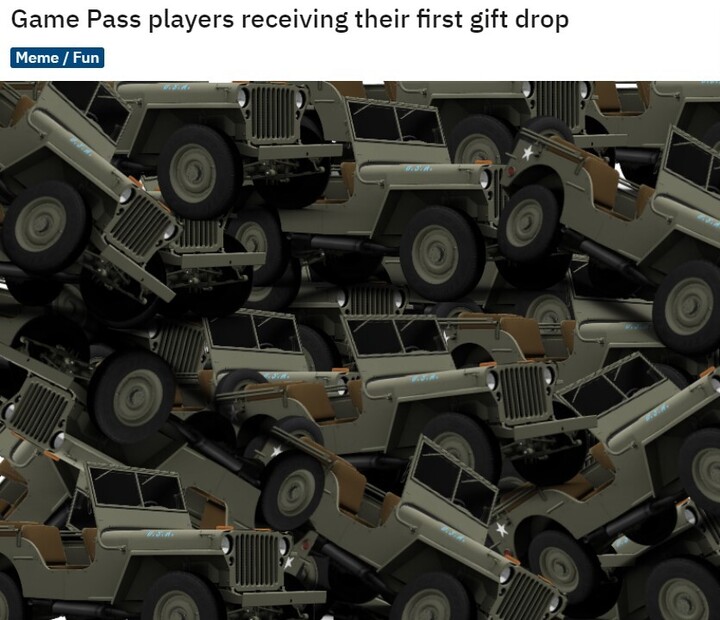 One thing is for sure, with 534 cars at launch (including Forza Edition variants, tuned cars from the Welcome Pack and the DLC content of the Formula Drift Pack) Forza Horizon 5 has nothing to complain about in this respecy. We gain new vehicles for virtually every activity. In fact, it can be said that our garage contains more vehicles than we have time to test them.

Those willing to try the title can do it for as little as $1 thanks to Xbox Game Pass subscription. The game is available on PC, Xbox Series X/S and Xbox One and on mobile devices in the Xbox Cloud Gaming service.