Dillon Rogers, the lead developer of the upcoming Thief-inspired stealth game Gloomwood, has released a video summarizing the progress made in the past year and discussing plans for 2022. He also included fresh gameplay footage in the video. In addition, the developer confirmed that an early version of the game will go on sale in Steam's Early Access this year.

Many of the improvements implemented last year were suggested by users who played the demo of the pre-alpha version. Introduced changes are to provide more freedom in choosing the methods of completing the tasks and dealing with threats, while maintaining the protagonist's vulnerability in direct combat, typical for the survival horror genre, and the need for careful sypply management.

Compared to the demo, an inventory system has been implemented in the game. It took the form of a large suitcase, which must be opened in the game world and items have to be pulled out from it. It has a limited capacity, so it is necessary to arrange the equipment cleverly, so as to minimize the occupied space. However, we can never fit everything in there, so choose the equipment that best suits our style of play. Players have also been given the ability to take bullets out of weapons and throw them to distract enemies.

In addition, the creators added many interactive objects to the world, such as safe locks with numerical combinations or chests that can be destroyed to obtain loot. Following the example of the Thief series, it has also become possible to silently steal keys carried by guards. The player can use them to lock matching doors, thus closing enemies' access to specific sections of the map.

One of the big downsides of the demo was the inability to destroy light sources. This feature has now been implemented. Switches and energy generators that can be turned off have also been added. In addition, the AI has been enhanced with a dialogue system, enabling guards to exchange information. Conversations that we will be able to overhear have also been added. Besides, the AI has gained the ability to destroy obstacles (such as wooden doors), as well as a morale system that affects the behavior of enemies in combat. 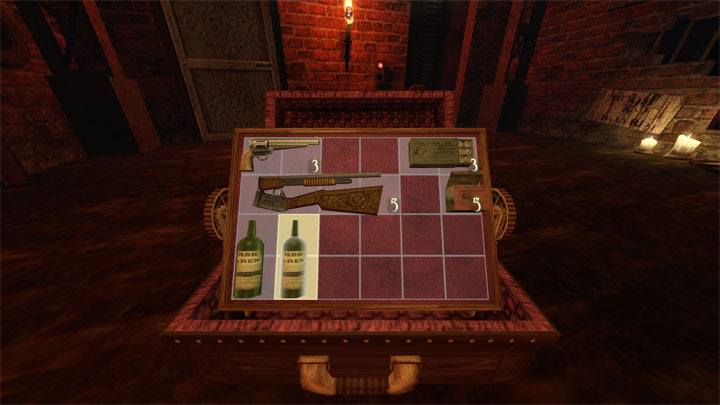 The game has gained, e.g. the option to play so-called equipment Tetris.

The devs also added the ability to set bear traps. Other toys of this type are planned, such as explosive charges activated after moving a tripping wire stretched. In addition, the mechanic of blocking sword attacks was reworked. Now, after a single successful deflection the technique will have to be repeated. In this way, combat against several opponents was made more difficult. AI has also gained the ability to recognize when the player uses this maneuver too often and the need to change tactics. Interestingly, in the campaign we will encounter enemies whose attacks cannot be blocked.

The devs have also introduced a silenced gun to the game. We can load it with several types of ammunition. Among them are weak bullets, enabling us to destroy lamps and activate switches remotely. There are also incendiary rounds.

These novelties were shown in the gameplay taking place on the map set in the fishermen's headquarters. Sea caves and the first city levels will soon be added to the game. The developers are also working on the implementation of a grappling hook and a journal, where the most important information will be recorded.