GPU prices continue to remain very high, even several times higher than the manufacturer's suggested values. The situation is best illustrated by a report published by analytics firm Jon Peddie Research. Despite the shortage of chips and a difficult situation in the market for component suppliers, sales of GPUs continue to grow - by as much as 24.4% during the year. Turnover in the graphics chip market in the first quarter of 2021 increased by 370% compared to the same period last year, mainly thanks to inflated prices. 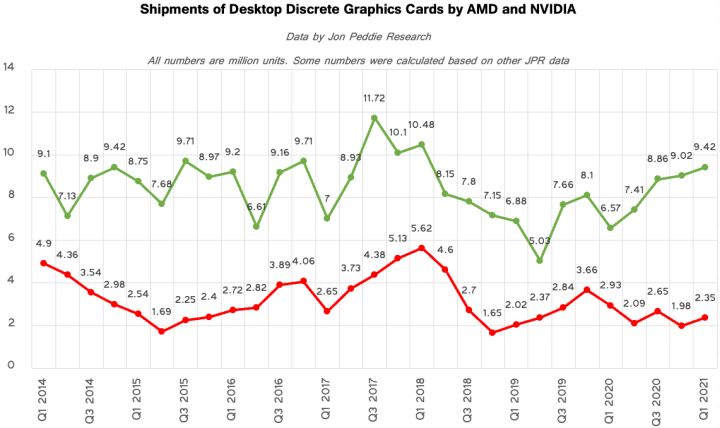 We can note when this situation began. The third quarter of 2020 was a crucial period when the prices of graphic chips began to rise significantly. This was caused by increased demand, which in turn could be due to the pandemic isolation. Not insignificant was the sudden rise in cryptocurrency popularity, in particular Ethereum and bitcoin. Miners suddenly began to need larger quantities of graphics cards. As a result, the stores ran out of stock, which in turn spawned scalpers, further aggravating the situation. Add to this the launch of new devices, especially consoles, and nothing more was needed for the "price bomb" to explode (Q4 2020).

The effect of this is that a high-end GPU, which on average cost about $500 at the beginning of 2019, now costs almost $1400. In turn, the price level of GPUs from the lowest segment has equaled the high-end level from two years ago (about $500). The most rapid increase can be seen in the prices of low- and medium-end devices - in Q4 2020 their prices went up even several times. Flagship models also became more expensive, but have been becoming more expensive systematically for the last two years, so the price hike in this "breakthrough" quarter was not so colossal.

Unfortunately, there is no indication that the situation will improve in the near future. Although the interest of crypto miners in new cards seems to be waning somewhat (software blockades, crypto price dips), there remains the problem of scalpers, as well as the shortage of chips and related announcements of further price increases. A report from TrendForce warns of a possible increase in the price of GDDR6 and GDDR6X memory by up to 13% (min. 8%) in the next third quarter of 2021. This may result in price increases for newer GPU models that use such components (Radeon RX 6000 and GeForce RTX 3000).