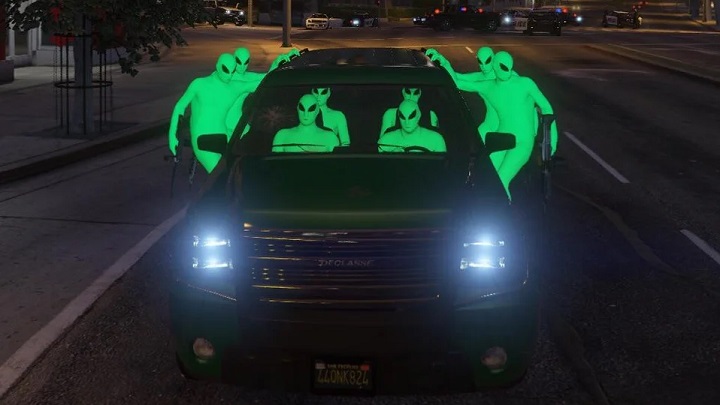 Barely two days ago, materials presenting UFOs, recorded by American pilots, were declassified. Apparently, the aliens weren't happy with the fact and have invaded the Grand Theft Auto Online servers. Witnessess from Reddit have documented aliens terrorizing virtual Los Santos, including the abduction of its inhabitants. They've lost their flying saucers somewhere and had to settle for an old van, and instead of experiments, they prefer the traditional earthly greeting (read: beating), but this does not reduce the horror of the whole situation. Fortunately, aliens are as eager to cooperate with other groups of aliens as people are to each other. The result - turf wars out of this world on the streets of the city. 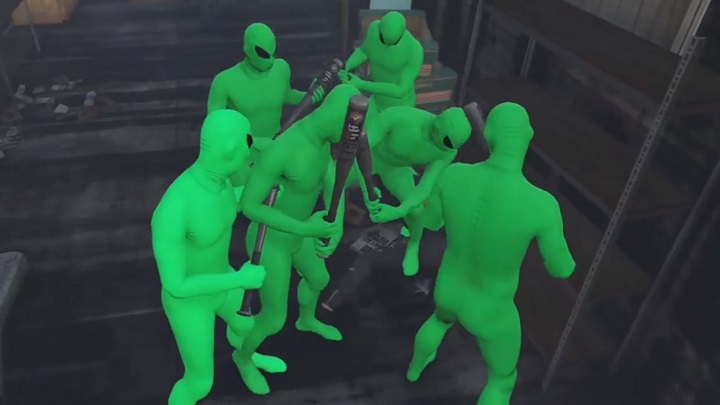 The aliens express their admiration for human culture by adapting the habits and tools of the natives (source: Reddit).

Seriously, though, what is this?

A Martian's outfit is nothing new, just like its use in a funny way. Green Martian Bodysuit and its purple equivalent were added at the opening of the casino in the Diamond Casino & Resort update. The following month we saw a group of "aliens" and at the beginning of the year a Minion gang appeared on the streets of Los Santos. However, a mass invasion occurred some two weeks ago after StraightWhiteMale02's Reddit entry. It happened that the aliens lived to see their own sub-reddit on the site, which now has 2.5 thousand users. In response, squads of men in black and Republican Space Rangers as well as monkey gangs waging war on the aliens appeared on the streets.

There are times when players are not particularly interested in the goals set by the developers.

These types of spontaneous events using elements present in the game are nothing new. If we've played in the free mode of any other online shooter, we could encounter a situation where the enemy teams gave up fighting and tried to do something unusual (or extremely stupid, but undoubtedly funny) together. Open-world games, which do not limit any time limits, give us even more room to show off. A group of creative Fallout 76 players lured others into deadly mazes, as experienced by some unfortunate users.

How to get the alien suit? 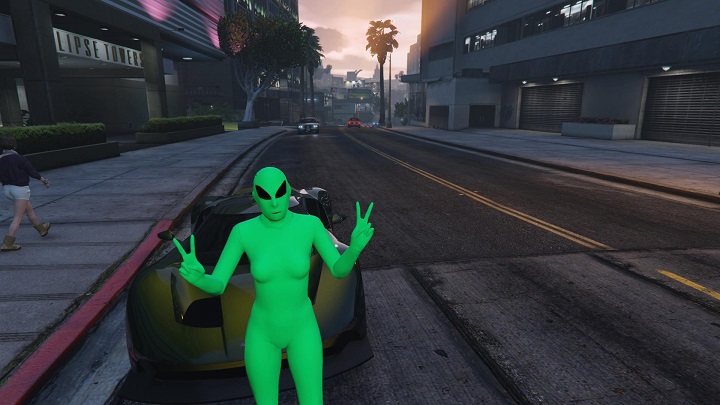 It doesn't take much to join the aliens - after all, money opens every door.

Green Martian Bodysuit can be purchased in any clothing store in Grand Theft Auto Online. The outfit can be found in the "Outfits" tab in "Outfits: Arena of War", in the "Bodysuits" category. Unlocking it costs a lot, as much as 358 thousand dollars and 330 thousand dollars for the purple version (unless you were lucky enough to get a discount in the Arena of War). Fortunately, the outfit is all you need to terrorize humanity together with your space brothers.

AC: Valhalla Has an Ace Up Its Sleeve - Devs of Black Flag