Not only Battlefield 2042 is getting quickly overtaken by older installments of the same series on Steam. This was also the fate of Halo Infinite, which recently sees fewer players than Halo: The Master Chief Collection.

Neither of these positions made its way to the top 100 most popular games on Steam. A glance at the data from SteamDB and Steam Charts clearly shows the decline in form of the newer game with Master Chief. 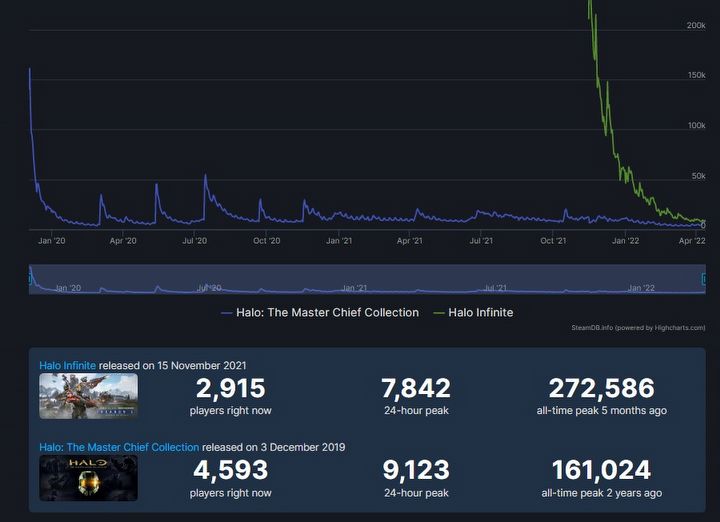 Comparison of the condition of Halo Infinite and Halo: The Master Chief Collection in recent days and months. Source: SteamDB.

Of course, it can be pointed out that Master Chief collection is, after all, not one, but several games, meaning several single-player campaigns and multiplayer modes. Moreover, Halo is a series with a console pedigree and it is on these platforms that it enjoys the greatest popularity. We also can't forget about the presence of Halo Infinite in PC Game Pass service (although it must be emphasized that the multiplayer mode can be played on Steam for free).

Season 2 aiming to save Halo Infinite

It should be reminded that a week ago 343 Industries shared the first details about the second season of Halo Infinite. It will bring with it, among other things, a richer season pass (also in the free version), more interesting challenges and new maps and game modes.

Perhaps this injection of new features (and probably a handful of fixes) will be enough to reignite interest in the game. However, we will have to wait to find out. Second season of Halo Infinite will begin on May 3. Moreover, it will lack the co-op mode.

More about the Halo universe:

Dragon Age 4 to Offer Most Interesting Characters Yet

Line War is a Strategy Game Where Orders are Painted