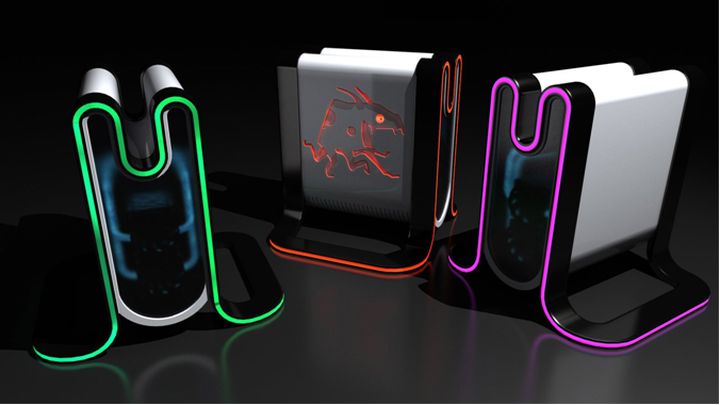 Last Thursday, quite surprising news came to the web. Developers from Slightly Mad Studios, previously known for the Project CARS racing series, have announced that they are entering the gaming equipment market with a new system called Mad Box. According to the manufacturers' assurances, its going to be the most powerful console in the world, which will not only offer the possibility of playing 4K resolution games, but also guarantee comfortable fun even with the most demanding VR games.

Ian Bell, head of Slightly Mad Studios, has published on Twitter a three-dimensional visualization of Mad Box, showing the planned appearance of the console, which, as he points out, still may change. At first glance, the device resembles a typical PC dedicated for gamers, in an unusual case with an "M" profile. On one side of the colorful box the manufacturer intends to place a large logo of the studio. The internal components of the console will be visible thanks to the illuminated transparent front. On top of the case there will also be a handle designed for easy handling of the system.

The final hardware configuration and Mad Box components are still being discussed internally within the company, but they are expected to be extremely efficient and meet the needs of the most demanding users. The price of the console will also be comparable with the competition. Bell also added that Mad Box is supposed to communicate with other consoles of its kind without the help of cables, although he did not specify exactly what he wanted (some kind of special local network?). Mad Box is expected to be available for sale in the next three years.

Of course, we must remember that although Slightly Mad Studios uses the console name in all promotional materials, Mad Box is likely to be an ordinary PC, enriched with special software and offering its users free access to the studio's proprietary graphics engine. This kind of experiments, with quite unfortunate results, have already been conducted by many manufacturers, including Valve studio, which promoted computers from the Steam Machines line.