David Jaffe, the developer who worked on the God of War and Twisted Metal series, seems confident that the PS5 will be presented in the next 4 weeks. This is consistent with numerous rumors coming from uncertain sources.

Michael Pachter from Wedbush Securities reports that Sony is not going to show up at E3. Again. Meanwhile, there are more or less reliable rumors on the web about when PlayStation 5 will be presented.

New photos of the PlayStation 5 development kit have been uploaded to the web. This time, in addition to the console itself, you can see the new model of the dedicated gamepad - presumably DualShock 5.

According to unofficial information, pre-orders of PlayStation 5 will start as early as March this year. On January 7, during Sony's conference, we may see the next-gen console for the first time.

Sony has posted an intriguing message on its website. The company intends to show  a unique vision of the future at CES 2020, which many people read as an announcement of PlayStation 5's official reveal.

Jensen Huang, Nvidia's CEO, made it clear at GTC China 2019 that the GeForce RTX 2080 is more efficient than the chipset installed in next-gen consoles that will debut in late 2020.

PlayStation 4 is receiving its second update this month, to version 7.02. It is designed to improve the performance of the system. The upgrade is not the smallest, as we'll need at least 470 MB of free disk space. Can we expect even more revolutionary PS4 updates?

We'll have to wait a bit, before the official information about Project Scarlett, the ninth generation console from Microsoft, will be released. However, there are some leaks concerning its specifications, and according to the latest of them, the stronger version of the upcoming hardware is supposed to be even several times more efficient than Xbox One X.

In an interview for Game Informer, Sony's executive vice president of hardware and operations engineering, Masayasu Ito, suggested that an improved version of the console might also be available next to PlayStation 5 after some time. However, one of the editors of Kotaku reports that PS5 launch titles will not be available on PS4.

Sony has announced that PlayStation has been included in Guinness World Records as the most popular home console brand in history. More than 450 million PlayStation family systems have been sold in the 25 years of its existence on the market.

Tom Warren from The Verge spoke on Xbox Scarlett devkits. According to the editor, Microsoft has made its development kits available only to few developers, and the development of the platform is much less advanced than in the case of PlayStation 5.

Another unofficial photo of the developer version of PlayStation 5 has appeared on the web. It confirms its unusual appearance and most likely also shows the new DualShock 5 controllers.

Phil Spencer from Microsoft commented on the support of virtual reality by the Xbox Scarlett console. Xbox's boss said that the company does not focus on VR at the moment, as this is not what customers expect from it.

There are new rumors about the performance of ninth-generation console devkits. According to a reliable source, PlayStation 5 is currently performing better in games than the competitive Xbox Scarlett.

Phil Spencer and Aaron Greenberg from Microsoft commented on the Xbox Scarlett console. They did not reveal any specifics, but assured us that the company had learned from Xbox One's debut and that the new platform would be able to hold its ground in terms of both power and price.

In several selected countries, Microsoft started offering an installment plan called Xbox All Access, designed for new Xbox One users, with the possibility of free hardware replacement on the next-generation console. Its terms and conditions confirm that Xbox Scarlett will debut in stores at the end of 2020.

One Twitter user who is behind the leak of The Last of Us 2's release date has informed fans not to sell their PSX, PS2, PS3 and PS4 games. This may suggest that the latest Sony console will be compatible with older versions. Additionally, a photo od PS5 devkit has been uploaded to the web.

Reports from August about the unusual appearance of PlayStation 5 devkits have been confirmed, and we've also learned that the console will use 100GB discs and offer backward compatibility with PS4.

Sony has officially announced the PS5 console. The device will have a number of new features, a modern gamepad with adaptive triggers, and will be available in stores in 2020.

A few days ago there were rumors that Xbox Scarlett will be equipped with a 4K camera for streaming content. Microsoft decided to deny these reports. The spokesman for the company informed that no such technology is currently being developed.

During the State of Play stream, a limited edition PlayStation 4 Pro console model was announced, featuring a visual theme from Death Stranding, the new title of Hideo Kojima. The device will hit the market in November.

Microsoft joins the fight for a better future for our planet and becomes part of the  Playing for the Planet initiative. In addition, the company announces the creation of the first consoles completely neutral in terms of carbon dioxide emissions.

Japanese industry journalist Zenji Nishikawa suggests that the PS5 will launch in two variants - more efficient and less efficient. In the past, Nishikawa was the source of a confirmed leak of Nintendo Switch Lite.

Tim Ash of BoxFrog Games believes that AMD Zen 2 processor that will power PlayStation 5 and Xbox Scarlett are a major step forward and will dramatically reduce game development time.

An infographic included in Sony's new patent, showing the potential appearance of the upcoming PlayStation 5 console, has been published on the web. This is probably not the final design of the device, but it shows the overall concept adopted by the manufacturer.

Talking to Gamespot, Phil Spencer, the Xbox brand manager, said that with next-gen consoles his company wanted to focus on gameplay smoothness and fast data loading. In his opinion, this is supposed to allow for a significant improvement in playability.

According to developers who have had the opportunity to work with next-gen console dev kits, PlayStation 5 offers greater performance than Xbox Scarlett. Game developers also point out that powerful consoles will allow the development of artificial intelligence and machine learning.

Phil Spencer, head of the Xbox brand, announced that Scarlett will not be the final Microsoft console. He also talked about the xCloud streaming service and the future of Xbox consoles.

Microsoft's conference on E3 2019 finally brought the expected announcement of a new console - Xbox Scarlett. The device will offer 120 FPS gameplay, raytracing support and several other new features like SSD.

We can be reasonably sure that during today's Microsoft conference as part of the E3 2019 fair we will see the next console of the Redmond giant. This is indicated by a message hidden in photos published by the company.

On May 21 a meeting for Sony investors - Investor Relations Day 2019 took place. As part of the event, the CEO of the Japanese company - Kenichiro Yoshida - spoke on the establishment of cooperation with Microsoft. In his speech, he said that consoles are now a niche in the gaming market.

According to Ainsley Bowden, founder and editor-in-chief of Seasoned Gaming, the next generation of Xbox consoles will be more powerful than PlayStation 5. The information comes from anonymous insider sources.

During yesterday's Inside Xbox presentation Microsoft officially announced the new Xbox One model. Xbox One S All-Digital Edition doesn't have any physical drive and will be launched in May this year.

Unofficial reports about the potential release date of PlayStation 5 have surfaced on the web. It seems that the console will not be available in stores until the end of 2020.

The new console by Sony will be equipped with a fast SSD to completely change the gaming experience. In addition, the Japanese giant shared first details about the new PlayStation, and also revealed that selected developers had already put their hands on PS5 dev-kits.

WinFutre has published pictures that allegedly show an unannounced version of the Xbox One S console, one without an optical drive. The new version may appear on the market at the beginning of May.

TweakTown suggests  citing the CEO of Gamestop as its source  that the next-gen consoles are not very far.

SEGA announced a release of a refreshed version of its once popular console. Genesis Mini will offer 40 classic titles available since day one. The console will launch this year.

According to the Windows Central website, the version of Xbox One will debut in May, this year. The console is to be delivered without a Blu-ray drive, making it significantly cheaper.

Sony is searching for engineers experienced in ray tracing technology, who are to work in PlayStation lab in London. This, obviously, raised speculations about whether the spectacular technology will be supported by the yet unannounced PlayStation 5.

Latest reports suggest that the new Xbox consoles, codenamed Lockhart and Anaconda, are to be officially presented at the E3. Halo Infinite is expected to launch alongside the next-gen consoles, but Microsoft hasn't confirmed this information.

Perfectly Nintendo website, known for gathering various "N-related" stats, reports that currently there are more than 1800 titles that we can play on Nintendo Switch.

Sony focuses on PlayStation 5, but the PS4 can still get more games

According to Daniel Ahmad of Niko Partners, Sony is already concentrating mainly on the development of PlayStation 5. The company has a few more games in store, but it is not clear which of the platforms they will be released. 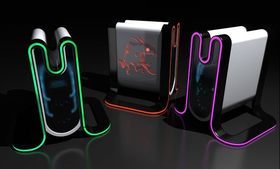 Developers from Slightly Mad Studios, mainly known for their Project CARS series, presented the conceptual appearance of their Mad Box console. The device, which was officially announced on Thursday, is expected to make its debut in the next three years.