When Marvel's Guardians of the Galaxy was announced at the E3 2021, some people had their doubts about the new project from Square Enix. It's hardly surprising, since the company's previous superhero game turned out to be - let's call it by its name - a huge disappointment.

Fortunately, it seems that this time we received a significantly better game, although not necessarily without flaws. In fact, there were a few critical reviews, whose authors gave a rating of 7/10 or even 6/10. However, even they had a lot of good things to say about Eidos Montreal's work.

Those who were worried about the atmosphere and story will be pleased to know that these are some of the most praised elements of the title. Marvel's Guardians of the Galaxy's script and narration are surprisingly good and the title is full of humor, for which audiences have come to love James Gunn's Guardians of the Galaxy. Even if it's not the Holy Grail in terms of gameplay (some of the plot twists won't come as a surprise), no one will probably complain about the story here. Especially since the title draws from the comics far more often than the cinematic adventures of the crew.

The voice actors did an excellent job, not only those playing the main characters but also NPCs and the enemies of Star-Lord and co. The same is said by reviewers about the audiovisual layer: the location designs and characters are "alien" (as befits a game that takes us on a journey through the galaxy), and the soundtrack helps give the game a unique atmosphere, which is hard to find in most superhero games. A nice addition are the extensive difficulty customization options, enabling us to adjust virtually every element of the game to our preferences.

Marvel's Guardians of the Galaxy is not without flaws

Unfortunately, even if for some reason we would ignore the texts with the lowest ratings, Marvel's Guardians of the Galaxy still could not be called a perfect title. In most reviews, there are mentions of some issues. In many cases these are details such as small visual glitches, but there were some more serious problems as well: dialogue desynchronization, missing options, etc. It should be noted, that the developers have already released an update to fix most of these problems (via Hardcore Gamer).

It would be nice if we ended listing the defects at this point. However, some reviewers also had other comments. Some of them believe that Marvel's Guardians of the Galaxy is too linear, despite frequent decisions with more or less immediate consequences (although other critics praise this element). More criticism has been leveled at the combat, which is seemingly rich and deep but - as a fair number of critics would have it - in no way forces the player to adapt strategically. As a result, battles can become too repetitive to be fun throughout the game. 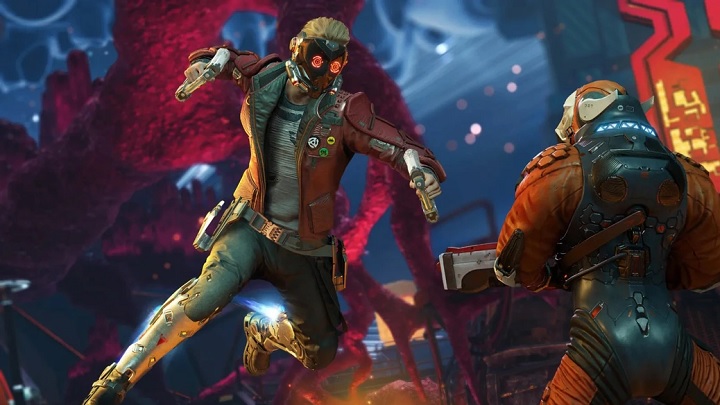 MGotG offers a lot of tactical options, but - according to some - it doesn't do much to force players to try to think during combat.

A few journalists also lamented the unused potential of the assembly mechanic (in short, the Guardians' meeting during battle, which - if we choose the right dialogue option - will translate into strengthening the team). Here, too, repetition creeps in too quickly, in this case in conversations between characters, because these - while still excellent - are heard far too often.

Aside from the more debatable criticisms (such as the game being occasionally dialogue-heavy, or the controls being an "overkill" for console gamepads), Marvel's Guardians of the Galaxy is clearly a good title, and one that many feel worthy of the cinematic adventures of Star-Lord, Gamora, Drax, Groot, and Rocket Raccoon. You'll be able to verify these opinions for yourself tomorrow, after the game's release on PC, PlayStation 4, Xbox One, PlayStation 5, Xbox Series X/S, and Nintendo Switch.