Not so long ago Amazon Games had a lot of reasons to worry. The MMORPG New World was losing players very quickly, which was connected, among others, with ill-considered decisions concerning further development of the title. However, it seems that the situation has been brought under control. The number of active users in the game has remained stable for some time.

Analysis of data provided by Steam Charts leads to such conclusions. The chart posted there clearly shows that since a month New World has a constant number of players. It remains at a level of about 100,000 users, with the record of the last 30 days being 124,000 concurrent users. 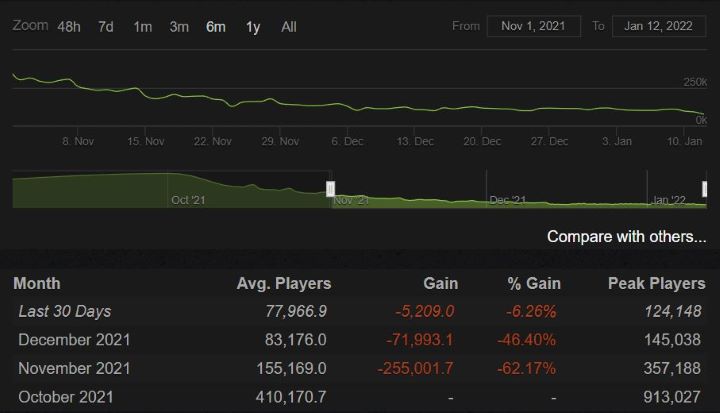 This has sparked a discussion on Reddit. Some are wondering if the developers of New World will succeed in reversing the trend that until recently seemed to suggest the game's inevitable death. Many commenters have stated that Amazon Games' MMO is a title with potential, but is plagued by problems that have not been ironed out since its release. They often affect key mechanics, which has a negative impact on gameplay. If the studio fixed the shortcomings and continued to develop the game in an interesting way, more players would gladly return to wander the island of Aeternum.

Unfortunately, for now, Amazon Games is focusing on small fixes, which can be seen in the recently released patch. Update 1.2.2, which has already hit the game, fixes barely a few small bugs. We can't find any new content or changes that players have been asking for on Reddit.

Most Downloaded PS4 and PS5 Games in 2021; FIFA 22 and Fortnite Reign Supreme

Dave Curd: PUBG Is Free Not Because of the Competition