PlayerUnknown has tweeted that his Battle Royale online game had beaten Grand Theft Auto V and became the fourth most played game on Steam on Sunday with the peak of 382,561 concurrent players. Right now, the game is even higher on the list – Playerunknown’s Battlegrounds is currently the third game when it comes to peak players count on Steam, right behind Dota 2 and Counter-Strike: Global Offensive. 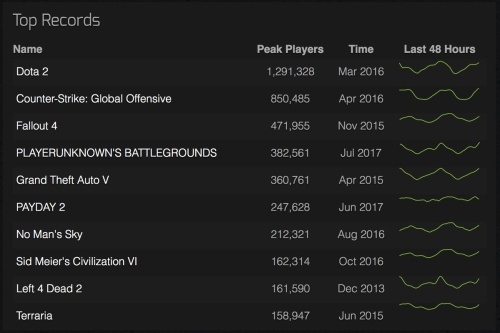 Note that Playerunknown’s Battlegrounds is still in Early Access and does not have all the planned features. Some of the things promised to come in the near future are a new map, climbing mechanics, FPP servers and zombie mode. The full version is to arrive later this year.

Playerunknown’s Battlegrounds has been one of the best-selling games on Steam for 17 weeks in a row and is in the top 5 most watched titles on Twitch. By the end of June, which is barely 4 months since the release, it sold 4 million copies, thus generating USD 100 million of revenue.

Observer from Layers of Fear devs launches next month