Fans of Path of Exile are surely awaiting the debut of the long-announced sequel, but they're not likely to complain about the lack of attractions for the first installment of the series. In January we received the enthusiastically received Echoes of the Atlas, and already another expansion has been announced. Revealed by Grinding Gear Games, Path of Exile: Ultimatum will debut next week on PC, and on April 21 it will also hit PlayStation 4 and Xbox One consoles. The announcement is accompanied by a trailer, but there's also a longer video for those wanting to learn more about the expansion from Grinding Gear Games lead Chris Wilson.

Path of Exile and Ultimatum of Chaos

When the expansion pack is released, Path of Exile's second act will add a new NPC - the Trialmaster. Linked to the Vaal civilization, this servant of Chaos will enable us to take on deadly challenges called Ultimatums, in which we will face hordes of enemies. Each of them will have a fixed goal and the option to adjust the difficulty level and modifiers that make the game more difficult. We can take on trials not only solo, but also in a party with other players.

If we manage to complete the challenge, we'll face a choice: either we finish the trial and gain a unique reward, or continue the fight. In the latter case, we have to choose another modifier and defeat more dangerous monsters, but in return for dealing with them we'll get even more valuable loot. There's only one problem: if we die, we'll lose all the promised treasures. Let's just mention that the trials will consist of up to ten minor challenges, which can be difficult even for end-game characters (let alone those starting the second act).

In addition to challenges, the Ultimatum League will also feature so-called Inscribed Ultimatums. These items will enable us to transport the hero to Trialmaster's dimension, where after sacrificing a certain object, players will take on a new challenge in exchange for a certain reward. According to the developers, this one is usually supposed to be worth twice as much as the item required to activate the trial. Inscribed Ultimatums will be tradeable, allowing some characters to get valuable loot more often and others to get rid of trials that are beyond their strength.

Ultimatum isn't the only thing that will enable us to acquire valuable treasure. The team at Grinding Gear Games came to the conclusion that many of the existing loot mechanics were "outdated," too bland, and not enticing enough. Therefore, the developers have thoroughly reworked the system of rewards, including those found in chests and dropping from mobs, as well as final bosses within the so-called boss runs. In addition, with the release of Ultimatum after killing high-level enemies we'll find more unique items associated with specific leagues and equipment dropping from bosses of previous expansions will be improved. 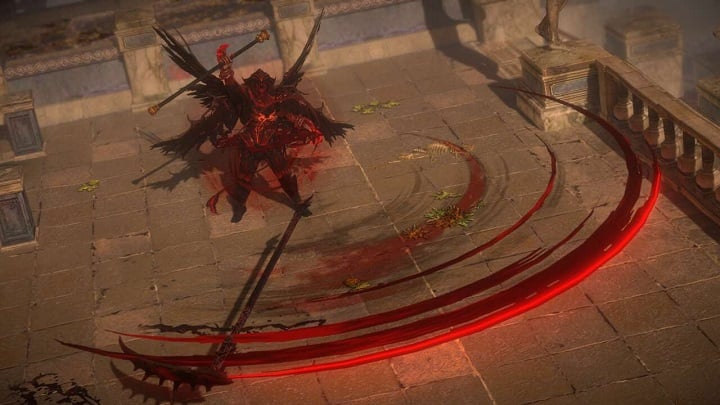 Ultimatum will bring a lot of news and changes.

These and other changes will make even the participation in clashes with regular opponents rewarded with valuable loot. At the same time, the creators want players to hunt for specific pieces of equipment in the content introduced in the expansion, thematically linked with a given type of equipment. Hence, for example, player-created temples, which after defeating the final boss will reward heroes with a rare item based on the theme of the rooms present in the dungeon.

Potions, skills and much more

Traders and merchants will also undergo changes, offering find brand new potion recipes. There will also be new jewels, as well as other improvements (for example, low life will be considered a drop below 50% LP instead of 35%, making it easier to use abilities based on it). The full list of changes will be revealed in the coming days. Let's mention that Grinding Gear Games also presented a new gameplay from Path of Exile 2.

PS5 Remake of The Last of Us Remake is Under Works

No Days Gone 2, We'll Get a New Uncharted Instead, Claims Jason Schreier