Already at the beginning of last year we reported that Sony is ending production of most PlayStation 4 models. Relatively recently we also learned when Sony would presumably abandon the console and focus exclusively on the PlayStation 5. Adding to all this are recent reports, which indicate that Sony is done with providing information on console sales. It was reported by Daniel Ahmad, a well-known analyst from Niko Partners. 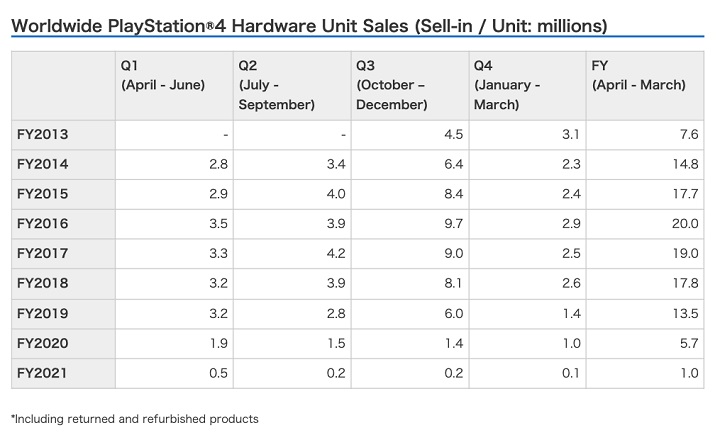 From the data he presented, it appears that PS4 has sold about 117 million units in total. This puts Sony's device at the top of the most purchased consoles, although the podium belongs to other consoles.

At the top is the wildly popular PlayStation 2, which boasts 155 million copies sold. Second place went to the Nintendo DS, with one million fewer buyers. Then there is the GameBoy and GameBoy Color, which together generate a result of more than 118 million.

In all of this, it is worth mentioning the Nintendo Switch, which is currently doing well and is far from dead. The Japanese giant's hybrid can boast 111 million copies sold at this point. So it can be assumed that it will still manage to overtake the PS4.

It should also be mentioned that PlayStation 4 was supposed to act as a support for the PS5, at a time when Sony's latest console was hardly available. Bloomberg reported about this earlier this year. Sony tried to slightly increase production to make up for the lack of availability affecting the latest console. However, the situation with component availability is slowly stabilizing.

The end of an era

With the arrival of the PlayStation 4, the PlayStation Network itself has also changed somewhat, becoming much more focused on social features. Not only have there been better opportunities in holding joint conversations with friends, but even screen sharing through the SharePlay function. This is a big step forward from the previous generation.

Alongside this, however, there were some less positive changes, such as PlayStation Plus, which became required for multiplayer games. It can also be said that remasters have arrived, which many viewers complained about. However, there is no denying the PS4 some truly great games, which are now starting to make their way to PCs as well. Despite this, Sony still has no plans to release new games at the same time on both platforms.