Sony boasted its results for the fiscal year that ended on March 31, 2021. The report shows that 7.8 million PlayStation 5 consoles have already been delivered to stores - 200 thousand more than the forecast of the Japanese company (the word "shipped" was used, but given the unflagging interest in the device in question, it is safe to assume that most of the devices have reached customers). In the first quarter of this year alone, distributors received 3.3 million units of Sony's ninth-gen console.

Financial results for the last quarter and full fiscal year 2020, by segment.

It is also worth noting the great results of Sony's older platform, the PlayStation 4. Over 115.9 million units of this device have already been delivered to stores worldwide (1 million in Q1 2021, 5.7 million over the past year), making it the second most popular desktop platform in the world ever (the first place is taken by the PlayStation 2 with a result of over 155 million copies).

How do the sales of the two platforms compare? According to Daniel Ahmad - senior analyst at Niko Partners - the ninth-generation console is doing 200k better than the PS4 over the same period. He notes that Sony expects this trend to continue in the current financial year, although the new device's sales potential will still be limited by supply issues. 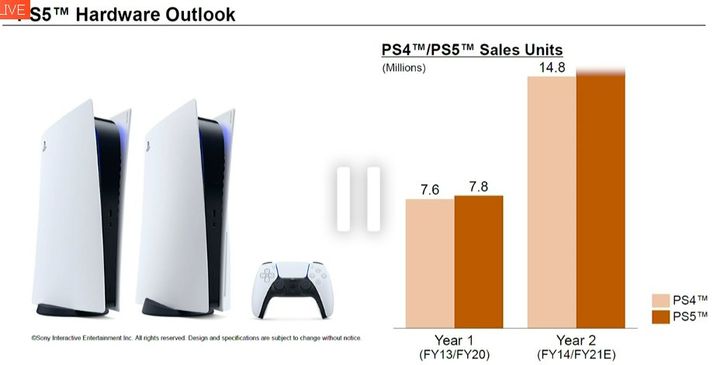 The PlayStation Plus service is also doing decently, with 47.6 million subscribers - up 6.1 million year-over-year. A total of 61.4 million copies of PS4 and PS5 games were sold in the first quarter of 2021, down 3.9 million from a year earlier. 7.9 million of those games were titles developed by Sony's in-house studios (down 1.3 million year-on-year). 79% of sales were digital versions of games.

Minecraft Mods Have Become a Business Worth Hundreds of Millions