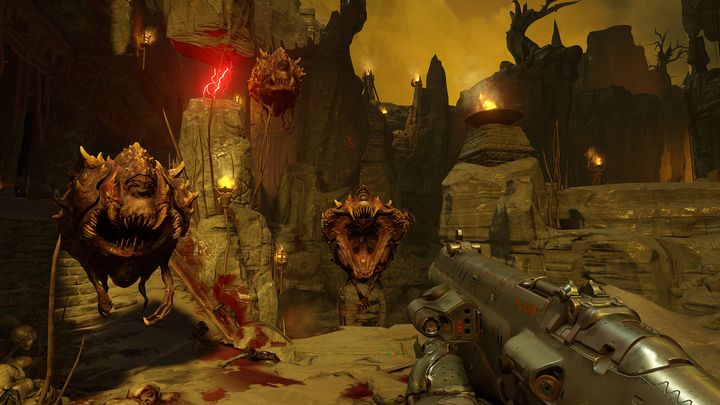 Games once again became a scapegoat. Screenshot from 2016 Doom - a game that actually is violent.

Tragic events have recently taken place In the USA - in El Paso (Texas) and Dayton (Ohio) there have been two mass shootings, in which dozens of people have died. Unfortunately, as is often the case in such situations, some politicians - including President Donald Trump - believe video games to be one of the culprits. New York Times interviewed Dr. Chris Ferguson, a professor of psychology at Stetson University, who debunked every thread of this theory.

The data on bananas causing suicide is about as conclusive, notes Dr. Ferguson. Literally. The numbers work out about the same.

A similar opinion is expressed by James Ivory, Professor and Research Director at Virginia Tech.

It is very similar to saying the perpetrator wears shoes, Dr. Ivory explained. They do, but so do their peers in the general population.

We should think about when we are more comfortable looking for something else to blame, he said, adding, I havent heard any senators talk about video games when an immigrant commits a crime.

The theories of politicians were also ruthlessly dealt with by the former CEO of Nintendo of America, Reggie Fils-Aime, who published an interesting post on Twitter.

The theme of the influence of video games on the psyche of youth returns like a boomerang every time a similar tragedy occurs. So far, no professional studies have emerged to confirm the link between the tendency to violence and digital entertainment.