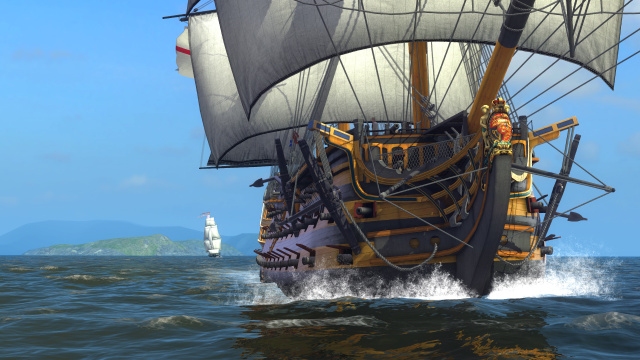 There arent many games set in the Age of Sail period, let alone realistic simulations. Those players who found Assassins Creed IV: Black Flags sailing too arcade should take a look at Naval Action  a multiplayer sea warfare simulation game with sailing ships developed by Game-Labs, the team that gave us an acclaimed strategy game Ultimate General: Gettysburg. The title is hitting Steam Early Access in a few hours, where it will remain through its alpha and beta phase until a full release.

Naval Action is set in a vast open world somewhere in the Caribbean during the 18th century. Players can engage in huge battles for up to 50 ship commanders, but also visit sea ports, build new ships, trade, and conquer harbours of hostile nations  or attack everyone and become a pirate. Developers took much care to promote realism, which is evident in authentic looks and behavior of ships (no turning around in a few seconds), advanced wind and physics model, realistic ballistics, and damage model. And yes, there is no players position shown on the map to help you navigate  only a compass, the sun, and landmarks. Check out a sample battle on this YouTube gameplay video (by OlavDeng2):

Initially, Naval Action is going to be sold for $36.99 (post-Early Access price will be higher). This price includes a digital copy of the game, plus a pre-order bonus: premium Yacht.

BattleTech and Shadowrun devs next game is Necropolis, coming out in March 2016