Over the past months, we have learned a lot about Assassin's Creed: Valhalla. So far, however, the devs have been very careful with sharing information about the mechanics associated with the development of the settlement, which is one of the biggest novelties the game will offer. Now, we've finally learned more about this aspect of the game, thanks to the announcements published by GameSpot and Eurogamer.

The role of the village

The Ravensthrope settlement is to be the centre of life for our character and their companions and the foundation on which the whole campaign will be based. We will return there regularly between adventures, not only to take advantage of certain gameplay options, but also to talk to friends and learn about changes in their lives. We will also regularly make various decisions there. The effects of some of them will be known quickly, while others will affect the whole story and Eivor's relationship with other characters.

The devs put a lot of effort into making Ravensthrope seem like a real place, inhabited by characters living their own lives, not just an empty model. The settlers will have unique looks, names, houses and professions. During the game we will see how they work to improve their settlement and interact with other residents. Many of them have their own goals and ambitions, which will influence the adventures in the main storyline. 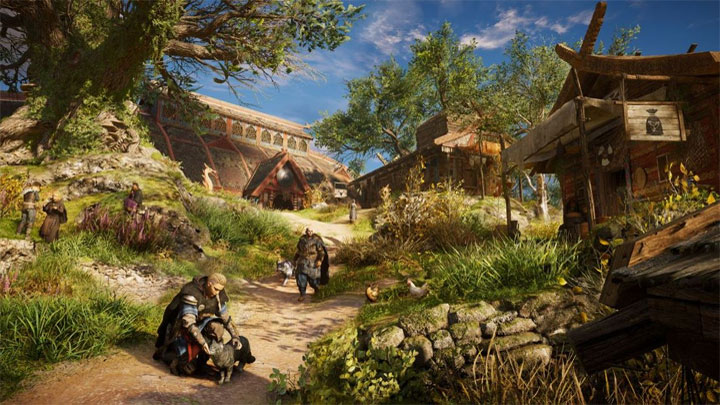 The buildings of the settlement and their functions

When we start playing, Ravensthrope will be empty and we will choose what to build first. New structures will unlock access to additional services and stories. There will be options to improve the village. We will develop it to a maximum of level six, and each level will bring an increase in the size of the settlement and unlock new facilities and investments. Interestingly, some of the changes in Ravensthrope will happen without our decisions. When we return from our adventures, we will often discover new shops or changes in architecture as a result of independent characters.

Our character will be given their own room in a large house that serves as the HQ for the Vikings. It will be managed by Randvi, Siegfried's wife. We will heal wounds there (sleep) and receive letters. In the war room we will choose missions and side tasks, make decisions about investments and talk to our comrades-in-arms. 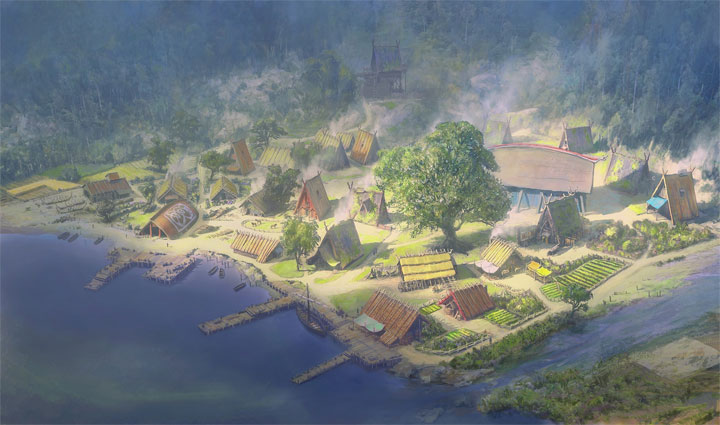 As the campaign progresses, the settlement will grow and gain new buildings.

Among the available buildings we will find a smithy, aviary, hunter's residence, bakery, cartographic studio, cemetery, shipyard and stable. The latter will enable us to train mounts, increasing their endurance and speed, as well as improving their swimming skills. In turn, in fact, we will buy resources and cosmetic items, and the barracks will provide access to the Jomsviking creator, i.e. members of armed parties, performing a similar role to that of lieutenants. Once they have been quipped, they will be able to join the crew of our ship. There will also be an option to share them with other players. We will also build houses for key figures and farms producing food for the big feasts, which will allow us to improve the stats of our comrades-in-arms.

Ravensthrope will also feature Mundi, who will always be keen to play the a round of dice game called Orlog as well as a museum managed by Octavian, a lover of the Roman Empire, who will try to persuade us to invest in the restoration of the surrounding ruins.

The Hidden Ones HQ and Assassinations 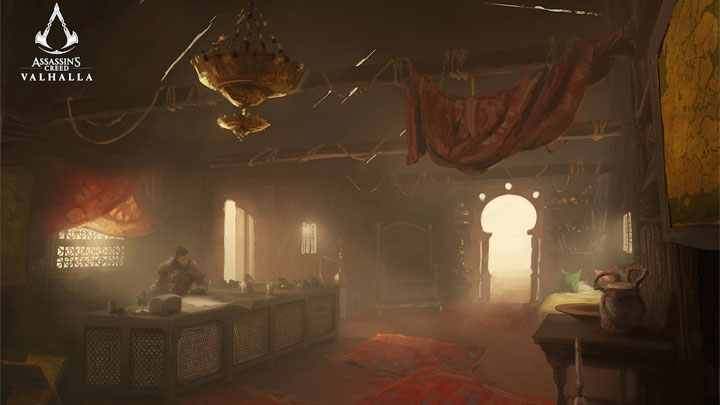 At the headquarters of the Hidden Ones we will receive, among others, orders for the assassinations of members of Order of the Ancients.

In the village there will also be an office of the Hidden Ones, i.e. the organization of secret killers. It will be managed by Hytham, acting as an assassin. Here we will use a board filled with orders to kill various targets.

Eivor (player character) and the Hidden Ones will have a common enemy in the form of the Order of the Ancients, who have a great deal of influence in England. During the game, we will eliminate them and take medallions from the bodies, which we will take to Hytham. In return, this will reveal more information about the history of the Assassins and give us new abilities and weapons.

As announced, the campaign will focus on the role of assassins in shaping the future of the world. We will not only kill tyrants, but also fight for justice and personal freedom of ordinary people.

In the village we also find the prophet Valka. With the help of her concoctions we will evoke visions, allowing us to visit mythical places and experience the key moments of Odin's life. It seems that this is how the presence of fantastic locations such as Asgard will be explained. From the village we will also contact the Nordic deities, although no details have been revealed.

It is also possible to have an affair with the settlers who manage the buildings, as well as other characters. This aspect of the fun will take place mainly in the village. Between adventures we will go on dates and develop love relationships. It will also be possible to break up such relationships. There will be no option of having children and getting married.

Let us recall that Assassin's Creed: Valhalla will be released on November 10, on PC, Xbox One, Xbox Series X/S, PlayStation 4 and the Google Stadia streaming platform. Two days later it will debut on PS5.