All indications are that we've just learned the release date of Shadow Warrior 3, the next installment in the series of FPS games by Polish studio Flying Wild Hog. The game is scheduled to debut on March 1, this year.

The source of this leak are the pages of PlayStation Store and Microsoft Store. Both provide March 1, 2022 as the release date. 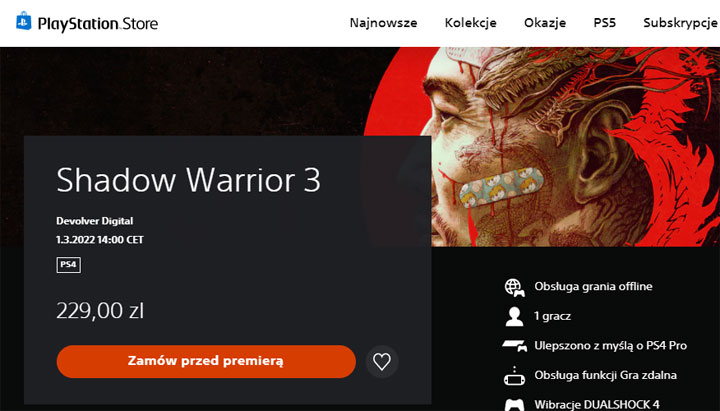 While waiting for Shadow Warrior 3 it is worth going back to the original from 1997, especially because it is free.

The full version of the first installment is available for free as the so-called Shadow Warrior Classic on GOG.com and Steam. For those who want to remember this production, we recommend using the SWP mod. It is an extensive tool that enables us to configure the game to a much greater extent than what the official menu. The project ensures full compatibility with modern PCs, improves graphics and adds support for high widescreen resolutions.

Digital store websites, especially those belonging to Sony and Microsoft, are traditionally an excellent source of leaks. It rarely happens that the information posted there turns out to be false, and in this particular case it is even less likely, because it is difficult to imagine that the employees of both services made exactly the same mistake.

Shadow Warrior 3 is scheduled for PC, Xbox One and PlayStation 4. Thanks to backward compatibility, Xbox Series X/S and PlayStation 5 owners will also be able to play the game.

The leak of the release date in both stores occurred on the pre-order tabs. Therefore, it is worth mentioning what bonuses are offered with this option. By placing a pre-order you will additionally receive full versions of the previous two installments, namely Shadow Warrior and Shadow Warrior 2, as well as DLC offering a special Katana Koromodako skin for the protagonist's sword.