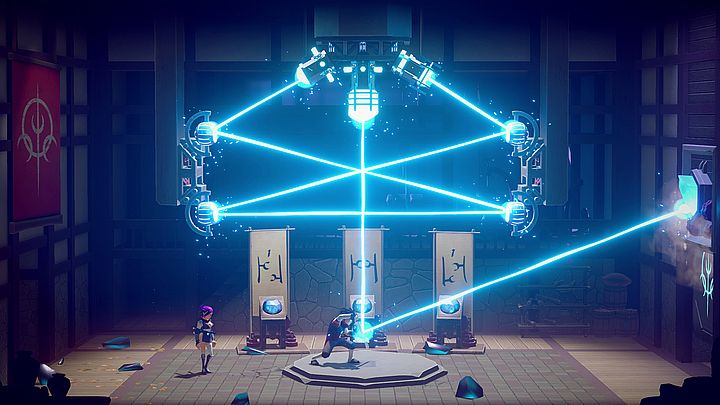 Shing! has a chance to stip up the indie community.

An independent Polish developer studio Mass Creation has announced a new production. Shing!. as the game is called, is a sidescrolling beat'em up title. The creators argue that the game will combine the classic style of arcade brawlers with an extensive and spectacular combat system. Crowds of opponents, power-ups and boss battles - that's what it's all about. The game will be released on PC (via Steam, where it can already be added to the wishlist), PlayStation 4, Xbox One and Nintendo Switch in the first quarter of 2020.

The title will offer an interesting control system based on analog controller knobs, which will allow players to make precise slashes in all directions (playing with the keyboard can be problematic). In the press release we can read that in the game we can play as one of the four characters. Each of them will have a unique set of skills. As far as the plot is concerned, the player's task will be to defend the land against the attack of mythical beasts and to recover the legendary Star Seed. For this purpose, the heroes will travel through 8 different locations. Are you curious to know what Shing looks like? Below you can watch almost 16 minutes of gameplay, which was released by the creators.

The video presents gameplay with all four characters in different locations. We visit the city, the jungle or the interior of a burning building. The game can be played solo or with friends in local and online cooperation for up to 4 players. The title will offer 14 types of opponents and 6 bosses. Interestingly, there will be optional arenas with additional special challenges. With the introduction of the Steam' game card, we have learned about the hardware requirements, which you can see below. It is worth noting, however, that they may be subject to change before the launch.

Mass Creation is a small studio that has been in close contact with Sony for a long time. The team is responsible for Draw Slasher and Run Like Hell! Both productions were released on PS Vita. Interestingly, the new game from the studio has already made its mark in the community and won an award at the India Showcase Gala during Digital Dragons 2019. There is nothing left to do but wait for the beginning of 2020.