Capcom has published teaser trailers for Project Resistance. The team survival horror will be presented at the Tokyo Game Show.

After weeks of silence in social media, SoulFire, the creators of The Chronicles of Myrtana mod for Gothic II, published a video in which they reveal new details about the production and show the first gameplay.

HackerOne is an organization that brings together hackers from all over the world to keep them busy. Thanks to the cooperation with the company, many of them have already earned dizzying sums, sometimes exceeding one million dollars. All is takes is will and a lot of skill.

During the Fan Expo Canada 2019 convention, a panel was held with the participation of several actors who provided voices for characters in Red Dead Redemption 2. Thanks to the questions asked by fans, we learned a lot of facts and details from behind the scenes of the production.

Google has announced bans for advertising of medical products and therapies that have not been adequately researched and proven to be effective. This has met with the approval of the medical community.

Nintendo may introduce new, more ergonomic Joy-Cons for the Switch console. May, but it doesn't have to, because so far the patent for bent controllers has only been filed online.

Two icons of gaming pop culture in one place. Keanu Reeves visited Hideo Kojima in his studio. The Japanese creator boasted of the meeting on Twitter and the web has exploded with guesses about the possible cooperation between the two gentlemen. 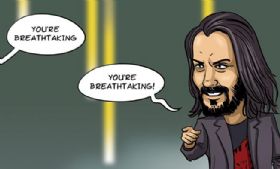 Cartoon Games - Issue #293 - You're All Breathtaking

Facebook and Google were accused of breaking the electoral silence during the local elections held in Russia last Sunday. The companies were supposed to display advertisements and political spots in violation of the law. The Russian media supervisory authority has not informed about possible consequences for the companies.

GreedFall - New Game From Spiders Without Denuvo, DLC and Mods

Focus Home Interactive and Spiders have revealed that the upcoming RPG GreedFall will not have Denuvo anti-piracy protection. You should also not expect DLC or mod support.

A few days after the launch, it is clear that NBA 2K20 was warmly welcomed by the industry media. The reaction of the gamer themselves, who flooded Steam with negative reviews, is quite different.