Soulstone Survivors is in early access, and this means that the developers are working on the game all the time and introducing regular changes to it. Patches bring not only improvements to the game's technical condition, but also additional content. A recent update introduced Overlord Mode to the game. In this guide you will learn what it is.

Due to the fact that the game is in early access, the gameplay and its mechanics may change over time.

Playing on normal mode, after defeating the first wave of enemies we will face a boss. After defeating it, the second wave will start and after it the second boss will start. In total, after defeating five of them in less than 13 minutes, 3 portals will open.. The blue one will lead to the exit, red one will redirect us to Overlord Mode, and the purple one to Endless Mode, which you can read about here.

In Overlord Mode, after defeating the first wave, we will face not one boss, but two Lords of the Void. Then, after defeating five waves of enemies, we will have to defeat a total of 10 such bosses. In the next cycle, instead of two Lords of the Void at the end of the wave, there will be three of them. Their number will increase with subsequent Overlord Mode levels.. 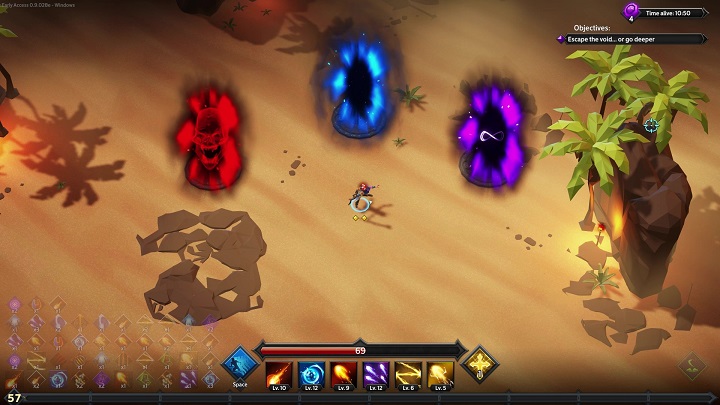 Changes after the update

Before the update, you could see only two portals - red and blue.

After the update, a lot has changed and now the situation with portals looks as follows:

More about Soulstone Survivors can be found below.

Info on Diablo 4 Could Appear Even Before The Game Awards

Castlevania From God of War Devs? Ragnarok's Director Dreams of It

Evil West - All achievements and how to unlock them

Thanks to this strategy, I fell in love with ancient Greece. It hasn't aged a thing

Earning Platinum Won't be so Easy on PlayStation Anymore