Although the second year has passed since the release of Star Wars: Battlefront II, Electronic Arts does not intend to lay down its arms and has presented a roadmap for the production in the coming months. Two new gameplay variants, as well as content from the movie Star Wars: Rise of Skywalker, lead the way. See more below. In addition, the roadmap also includes new maps (Venator and Dreadnought, which will debut later this month, and the Felucia prepared for September), support units (like the September Clone Commando), the possibility of rebirth at command posts, and a special event.

Roadmap for the second Battlefront in all its glory.

The first of the new game modes that will hit Star Wars: Battlefront II in September is the co-op mode, where four-player teams will perform various tasks for the Galactic Republic or the Separatist Alliance. Missions will allow them to take part in large-scale battles on the planets: Kashyyyk, Kamino, Naboo, Felucia and Geonosis.

The second variant of the game, which the creators are working on, is Instant Action. The mode that sounds somethat like Battlefront games from Pandemic Studios is designed for solo players. It is to draw on the land-based combat phase of the Supremacy module, and the fun of capturing command posts will take place on the same planets as the cooperation missions. The creators of the multiplayer will also "borrow" the possibility to choose the character class and use vehicles on the battlefield.

Additional content taken from the film Star Wars: Rise of Skywalker. is now shrouded in mystery. The publisher has limited itself to assurances about the "excitement" with what the company has prepared for us and a promise that it will share some details as soon as possible. 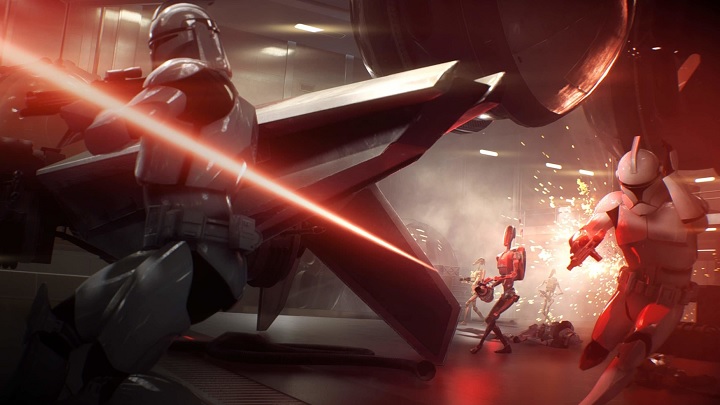