Yesterday during the Xbox & Bethesda Games Showcase we got a pretty extensive gameplay footage from the upcoming Starfield. What's interesting, Bethesda's game woke up fans of Star Citizen, who began to, like it or not, compare the two titles.

Fans of the space simulator divided into two camps: enthusiasts and complainers. The first group sees differences between Star Citizen and Starfield, while claiming that Cloud Imperium Games could take some inspiration from the RPG.

"Not sure if everyone has seen the Starfield game reveal,but if this game lives up to it’s potential it will fulfill a lot of the promises star citizen has yet to live up to. This also might be the fire CIG needs to live up to their promises. Looking forward to the future of space sims! Very exciting times for fans of space games," wrote SuspiciousSquid94.

Honestly as annoying as seeing these posts are im not gonna lie when i say i kinda hope cig looks at the game and is inspired by some of what they have its always good to look at your peers and see what you can learn from them in the end more space games are always welcomed but i hope cig watches closely the events of starfield to make an even more immersive and amazing game," wrote itzyaboiraisins.

Many players also said that they would love to try out the RPG - after all, the more games set in space, the better for SC fans. Furthermore, some would like CIG to not only be inspired by the options that will be available in Starfield (this is mainly about customization of spaceships), but also the announced release date - 2023.

Why would you even compare them...?

It's time, then, to visit the second camp. Here, in short, players are rather negatively disposed to Starfield. Some say that Bethesda's game is no competition and SC has nothing to worry about. Others, that in their opinion comparing a generic RPG to the still developed title from CIG is completely unnecessary, because SC will do everything better anyway (of course, this is an extreme approach).

Nothing will touch Star Citizen in my mind. Why? Nobodys insane enough to do what chris has done. Starfield might look nice. But i doubt the gameplay will go much beyond any other fallout game. Show me some gameplay of it being mutiplayer, muticrew, multiship, multifaceted, with a character builder and tons of clothing options. And then I'll agree its competition." wrote davidnfilms.

They are different genres. Star Citizen is a sandbox mmo. Starfield is Fallout/Skyrim RPG in space. Anyone that ditches SC for Starfield as direct competition is an Idiot," wrote Key-Ad-8318.

The more games, the better

The positive aspect of the Starfield vs Star Citizen "conflict" is that players can see which game suits them better. 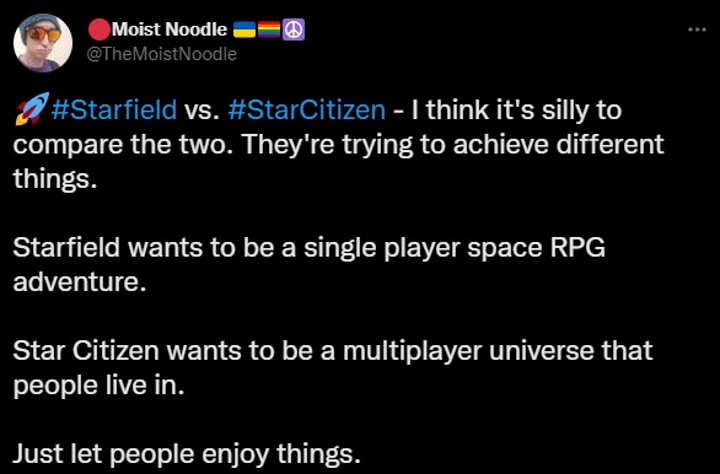 Those who prefer character progression, space exploration and Bethesda will certainly choose the first of the games. On the other hand, players who prefer MMOs, want to engage in the development of the game, or just prefer simulators will probably lean towards Star Citizen.

Both games can, and from next year even will have to, coexist. Even the most ardent fans of SC don't want it.

Steam Next Festival Launches; Try Out Games Shown at 'Pseudo-E3'

Does Starfield Really Look Like No Man's Sky? Here's a Comparison

Maurice the Horse in DBD - What Happened to Him?