Valve published its usual weekly listof bestsellers (by revenue). There were many changes in the top ten. The leader turned out to be the co-op game It Takes Two, which occupied the number two position in the two previous lists.

This time, a new comer landed on the second place - the Stellaris: Nemesis expansion, which was released last Thursday. This shows how powerful the space strategy from Paradox remains. The game will soon celebrate its fifth birthday, but it still manages to attract crowds. According to SteamDB data, yesterday, at the hottest moment of the day, the game was played on Steam by over 55 thousand people simultaneously. This result is just below the game's activity record (68 thousand, set five years ago).

Looking at Stellaris' activity results on Steam, it is clear that the release of the expansion encouraged a ton of players to return to te game. In the weeks preceding the release of Nemesis, the daily records were around 10-15 thousand. 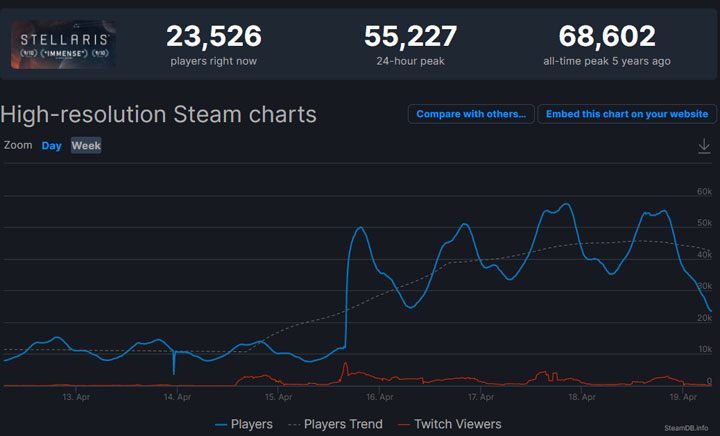 The chart shows a massive spike in activity, which occurred on April 15, the release day of the Nemesis expansion (source: SteamDB).

A large drop, to the fifth place, was recorded by Outriders, which has been plagued by numerous technical issues since its release. The game was the leader of the two previous lists, but last week it was overtaken by Sea of Thieves, another online game, which took fourth place this week.

Moreover, thanks to discounts, Monster Hunter: World - Iceborne and the survival action game The Forest returned to the top ten. Both offers will end this afternoon, so if you want to take advantage of them, you need to hurry up.

Sony Caves In - PlayStation Store Will Remain on PS3 and PSV

Gamers Needed 13 Years to Find This Obvious Shortcut in Trackmania

This Keyboard Grenade is a Blast