Reddit user CelestialMisery shared with forum users an interesting screenshot. It shows suspicious reviews on Steam. Some of the quoted posts are identical to the word.

We decided to trace the accounts of four users who posted reviews of The Adventures of Loopy. We wanted to check if the above is not just a coincidence and laziness of reviewers who simply picked up someone else's comment.

It turns out that all four of them shared their impressions under another indie game. It must be admitted, however, that this time the posts differed. Moreover, at least 9 games were rated by at least 2 of the accounts we analyzed. What adds to the spiciness of the case is the fact that most of these titles are little known independent games, which have no more than 100 reviews. Of course, it should be noted here that it can be a coincidence or the players analyzed by us are friends with similar tastes. Which is not so unbelievable, since at least three out of four users have the same friend on Steam.

However, there is more suspicious activity. If we look at the reviewed titles, we notice that the game has rarely been played for at least 5 hours. Of course, this can be explained by the length of the game.

Another quite puzzling feature is that the games rated by our chosen users were suspiciously often reviewed "wholesale". By "wholesale" we mean that a person commented on several games on the same day or day after day. 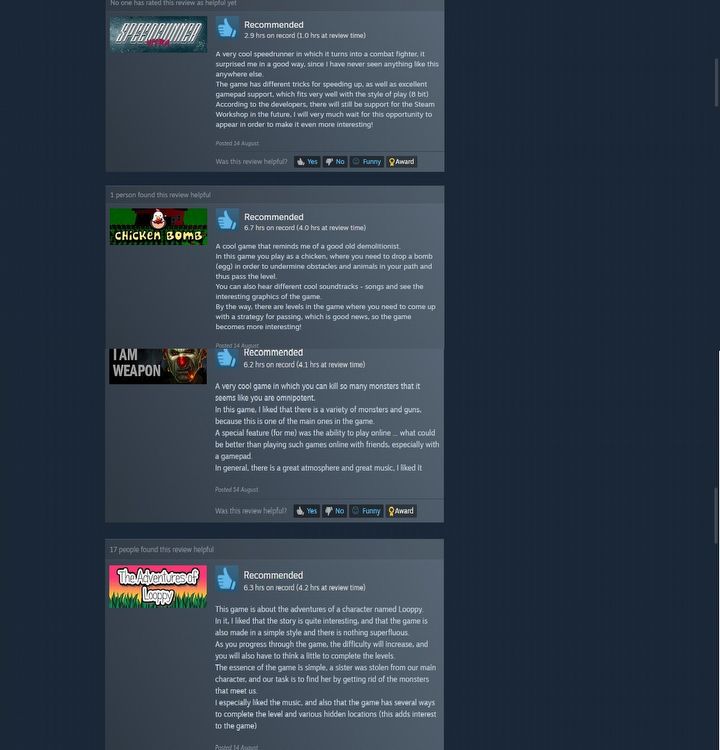 Of course, none of the above proves that someone paid for these reviews, and even if someone did, it doesn't prove that they didn't like the games. However, an aware Steam user should remember that not all reviews are written selflessly.

The issue of paid reviews on Valve's has already been raised, for example in an article on PCGamesN from 2016. The editor of the wesite talked to several people who offer paid reviews. Unfortunately, it turns out that all but one promised a positive opinion.

We also managed to find review sale offers without much difficulty. According to the advertisement on Fiverr, which is a place to offer part-time jobs, the price of such service is: "the cost of the game + $6."

Please note that reviews issued by players can be unfair for many reasons. An example of this is The Last of Us: Part II, which was bombed with negative ratings immediately after its release, not necessarily deservedly. Therefore you have to be careful when analyzing the opinions of others.