PCWorld reports on an interesting case of a Norwegian gamer who in 2020 decided to sell his gaming PC and focus on his personal life. When, after a year, he decided it was time to return to his hobby, he encountered an unpleasant surprise after trying to log into his Ubisoft account.

As it turned out, he was unable to access the service for some reason. An attempt to reset the password was successful, but the account was still inaccessible. Tor, as this player introduced himself, eventually contacted the support department of the French publisher and found out that his account had been deleted due to inactivity, and he lost access to all previously purchased games.

“If the account is closed, there is no way to restore it,” claimed a Ubisoft rep 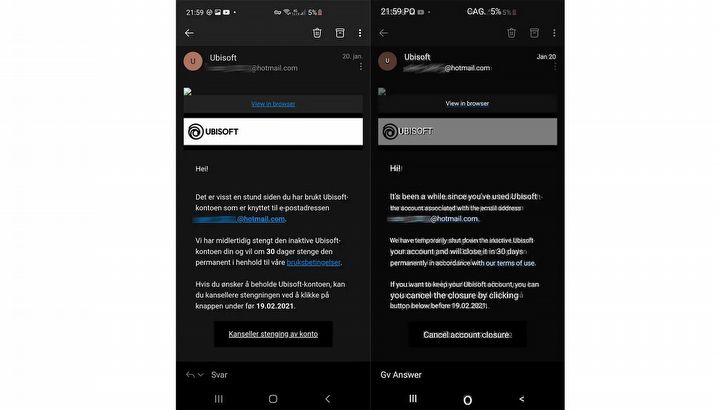 A copy of the email sent by Ubisoft. Source: PCWorld

Tor unearthed the message from Ubisoft in his email inbox, in the spam tab, which warned that his account would be deleted if I didn't log into it within 30 days. If you think that that's a bit much, well... Everything is in accordance with the terms of service, where we can read:

"We may suspend or close your Account and your ability to use one or more Services or part of the Services, at any time, automatically and at our sole discretion where: [...] upon notification, where your Account has been inactive for more than six months."

Further excerpts point out that once the account is deleted, the money spent on it will not be refunded and we will lose access to the digital goods purchased. How so? Because of the GDPR, which applies within the European Union. This was confirmed by a representative of Ubisoft, responding to an email sent by PCWorld's editor:

"We have implemented the account deletion process in compliance with the requirements of the GDPR (article 5.1e). Our policies are aligned with legal requirements and with the standards of the industry. This measure also acts as a protection for our players against fraud."

The steps that are taken to verify that an account can be deleted were also revealed. The list includes:

The spice of the whole matter is added by the fact that in this case the automated system proved to be overzealous, which was admitted by the company's spokesperson. He pointed out that the described case is not completely covered by the rules. The user support department will contact Tor and ask for all the data to clarify and somehow resolve the case.

PCWorld asked gaming regulations lawyer Ryan Morrison for a comment. Morrison indicated that while he doesn't support such overzealous actions, from a legal standpoint, everything is perfectly fine. The company can revoke our access to purchased digital goods, or even delete the account, at any time. He also reminds us that by choosing to purchase digitally, we acquire only a license to use the game, as opposed to the boxed edition.

How do other companies behave in similar cases? Valve has revealed that it never deletes inactive accounts. Microsoft only does this in the case of Minecraft Realms if a user has not been active for 18 months. Riot Games, on the other hand, deletes inactive accounts, but makes sure that the player receives an email notification and has time to respond. Blizzard, on the other hand, actively battles users who create numerous accounts to occupy nicknames. If such a profile is unused, it will be deleted.

So if you haven't logged in to your Ubisoft Connect account for more than six months, you'd better do it - and remember to periodically repeat this activity. You don't want to risk losing access to the games you've bought, do you?

Mass Effect 5 Will be Powered by Unreal Engine

Mass Effect 5 Will be Powered by Unreal Engine