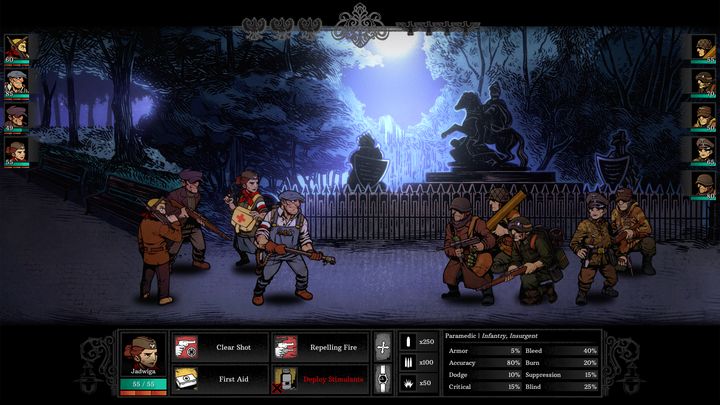 Warsaw - an independent strategy game from Pixelated Milk, whose action takes place during the Warsaw Uprising - will be released a month later than originally planned. The new release date is October 2, 2019. The developers gave the information in a special note on Steam. The reason for the delay is the desire to refine the title.

For the last two months we took part in WARSAW's preview tour around Europe culminating in last weeks Gamescom. The goal? Showing the game to the media. The reception? So far it would seem that we have something special in our hands.

At the same time we had a growing concern that we might not be able to provide you with the game as polished as we would have wanted it to be. Therefore  after two weeks of weighing in all the pros and cons a final decision was reached yesterday: to delay the launch of WARSAW to 2nd of October.," the note reads.

Warsaw is a turn-based strategy with RPG elements, modelled after the famous Darkest Dungeon. By leading an insurgent unit, we will try to take Warsaw back from the hands of the Nazis. The game was announced in February, this year and is coming to PC, PlayStation 4 and Nintendo Switch. It is worth noting that the new release date applies only to the PC edition - console versions will be released at a later date.

Official hardware requirements have appeared on the profile of Warsaw on Steam. A modest rig is more than enough to run the game.

AMD Will Pay $12.1 Million in Damages for Misleading Customers