Tomorrow wil mark the release of the new version of Windows, to be precise, the version with the number 11, which was advertised, among other things, with the slogan: "If you're a gamer, Windows 11 is for you". However, according to the discovery of UL, the company responsible for the 3DMark benchmark, and a test conducted by PC Gamer, it may not be quite so. Here's the thing. Virtualization-Based Security (VBS), a feature unlocked in the new system, reduces performance in some games by nearly 30 percent.

VBS is not new, it was already present in Windows 10 - simplifying the operation of this feature, it is simply an additional protection of the system against malicious software. As we can read on Microsoft's website:

Virtualization-based security uses the Windows hypervisor to create isolated regions of memory from the standard operating systems. Windows can use this security feature to host security solutions while providing greatly increased protection from vulnerabilities in the operating system. [...]

As you can see from the graphs that PC Gamer has compiled (below), frame rate drops can be both negligible and huge. For example, in Shadow of the Tomb Raider the fps count with VBS enabled was 28% lower than when VBS was disabled. The situation was similar in Horizon: Zero Dawn or Metro Exodus. On the other hand, Far Cry: New Dawn coped very well despite the active protection, because the number of frames dropped only by 5 percent. 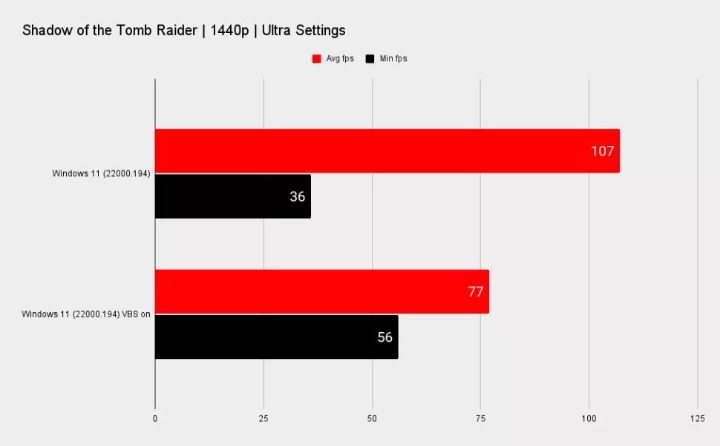 Graph showing the number of fps with VBS enabled and disabled. Source: www.pcgamer.com.

Importantly, VBS will not be enabled by default in Windows upgraded to a newer version. Therefore, if you are going to download the new system on the day of its release, you can do so without worrying about fps drops. The problem arises only when we're talking about new configurations, which will have Windows 11 installed by default - then you can worry about active VBS.

Of course whether you should pay attention to this feature depends on the purpose for which you are using your computer. If these are office applications, VBS will not harm you, and you will be safer by default. Uncertainties arise in the topic of ready-made configurations aimed at gamers. If the manufacturers (e.g. Dell, ASUS, HP) care about your satisfaction and performance, then VBS should be disabled in their kits to avoid making life difficult for gamers by removing the need to fidde with the BIOS. How exactly the VBS issue will look like, we'll find out the moment Windows 11 hits the stores as a "ready-made" operating system.

If you want to check if VBS is enabled on your system, you can do it through the MSInfo32 diagnostic tool. In the hardware information summary, "Virtualization-based security" - this is the feature being discussed.