The day before yesterday we saw the official announcement of a new expansion for World of Warcraft - Dragonflight. Along with it the game will gain a new race of humanoid dragons - Dracthyrs, whose appearance, to put it lightly, the players do not like. In this regard, however, there is light at the end of the tunnel - the options to customize the character's body build.

So we've got normal dragons?

Actually, no, but let's start from the beginning. Yesterday BlizzPlanet published an interview with female Blizzard employees. One of them, Tina Wang, was asked about the design of the Dracthyr, and more specifically, which of their forms will be visible in combat.

In addition to explaining that we'll be fighting in dragon form (which, by the way, is closely related to the Evoker class), Wang also brought up the subject of the character's appearance and the possibility of changing it.

"[...] There is more customization than what you saw in the video. there’s actually so many ways that you can customize that Dracthyr. Even the shape of the face. You can have, like these snouts that can look more ancient, or more sleek, or like a more blunt.

You can even slightly change your torso to be like slightly more slender or slightly bulkier; and the armor that you wear is a type of armor that you will be able to customize at the Barbershop, too.. So Dracthyr, I think they’ll also be able to wear shoulders, tabards, belts across their visage and Dracthyr form. While the visage form is able to wear all-armor."

A screenshot of a more massive Dracthyr also appeared on Twitter . No one will be surprised, however, that the community expresses disappointment in the comments due to the very small difference from the standard "delicate" appearance of the race. 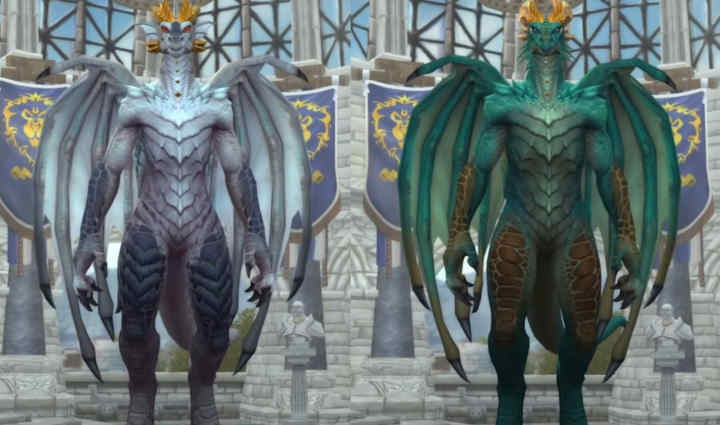 A slender Dracthyr versus his more buffed version. Source: Twitter.

Whatever, add fuel to the fire!

If Blizzard's designer's statement was meant to reassure the players, it probably didn't quite work. In fact, some people have accepted the vision of slender dragons, and the option of expanding the torso, changing the jaws, etc. is enough for them.

However, there is a group of players who not only do not like the dragon's form. They are also not satisfied with the fact that it will be the form visible in combat (although, you know - no one forces them to play a Dracthyr).

"Same mistake they made with the worgen. Blizz needs to allow for both Drac and Worgen to not only choose which form you wish to currently be in whether in combat or not, at any time for any length of time, but also the humanoid needs more options so players can choose humans, dwarves, elves, orcs,trolls , etc. As their humanoid form," wrote UnseenHand.

"It says in the article right there that your armor won't be on the dragon form. Your dragon form will get some armor-like customisation options in the Barbershop, like a Tabard, shoulders, and a belt, but only the Visage form is able to wear actual armor. Hence another argument for letting us play in Visage form if we want. Dracthyr use the Worgen rig, but Worgen can wear armor on their Worgen form while Dracthyr will only get an apron," wrote bluebird91.

So as you can see - either way is bad. After all, the expansion has barely been announced, and the Dracthyrs' final appearance may still change.

At the very end it is worth mentioning that if you would like to test the Dragonflight expansion before the release (whose date we don't know yet), you can test it on WoW's official website, where you will find a link enabling you to sign up for beta tests. It also features a detailed description of the upcoming DLC.

Skywalker Saga Sales Biggest in Galaxy for a LEGO Game

CS:GO and Old Age - When Are Pro Gamers at Their Best?