Daddies are the hallmark of the first BioShock: massive monsters in heavy deep-sea suits with drills instead of one of their hands and giant oxygen cylinders strapped to their backs. He introduces himself to the player in the best possible way: by drilling one of Rapture's feral inhabitants through and then smashing his head against a nearby window. It's impossible not to conclude that this is just another of the inventions that an underwater city has released into the world; an aggressive beast to get rid of. In addition, knocking them down is one of the biggest challenges in the whole game, as it requires far more cunning and strategy than emptying a clip or two. So why should we be sorry for them? 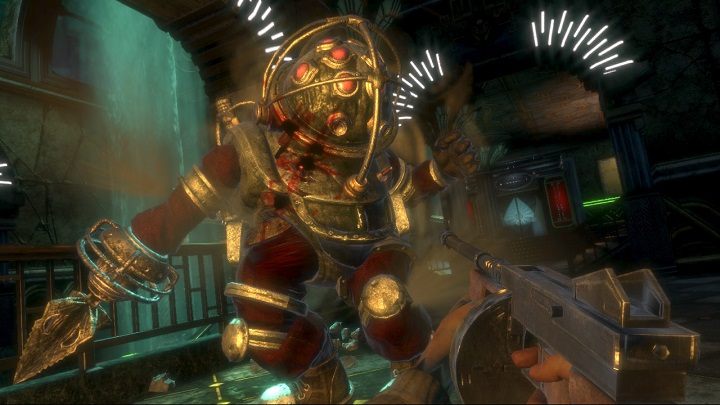 Daddies tolerate the presence of strangers, but if you start disturbing them in any way, you'll be the first one to find out.

First impressions are often wrong, and so is this case. Daddies are extremely difficult enemies, and fighting them makes for the most exciting moments in the entire BioShock. It quickly turns out, however, that these monsters are not in such a hurry to fight us. They usually completely ignore the player's presence, focusing on their only task: protecting the Little Sisters - little girls collecting the powerful ADAM mutagen.

The problem lies in the mutual dependence between this duo. Rapture is a utopia turned into a nightmare, a city full of mutated lunatics willing to bludgeon anyone they see with a wrench. Daddies and Little Sisters are a model example of the horrors that have been perpetrated here: men being denied speech and free will, and girls being genetically forced to extract bizarre substances from dead bodies. And yet it is their attachment to each other that is the latest manifestation of humanity in the underwater metropolis. When a Daddy dies, the Little Sister he protects begins to wail over his body; when the player decides to kill all the Little Sisters, the Big Daddies roam aimlessly, calling them from their hiding places. Who knows if this concern for each other is not the only human reflex that has been observed in Rapture.

In the later parts of the BioShock series, the creators stated that they did not necessarily need to serve as scary and hard-to-kill enemies. The two sequels – released in 2010 and 2013 - take a slightly different approach to this iconic character. In BioShock 2 players even assume the role of a prototype version, the so-called Subject Delta, who protects one of the sisters and is not yet fully self-contained. In the Burial at Sea expansion to Bioshock Infinite, players return to Rapture, where they have the opportunity to heal a badly injured Daddy.