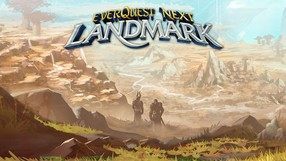 An online sandbox game set in the universe of the popular EverQuest MMO title. The game can be considered a spin-off created on the side while the developers work on the official sequel to the series. Daybreak Game Company is giving a huge open world to the players, who can shape and develop this environment freely. The gameplay is largely based on the mechanics present in the very popular Minecraft, and the most important aspect of the gameplay is an extensive crafting system, giving access to different tools as the player progresses. These allow the crafting of various things - from simple walls to complex and creativity-driven buildings. Interestingly, the players' creativity is appreciated by the creators, for the best ideas of the virtual architects are transferred to the world of EverQuest Next. What is important, the players' virtual creations are going to look the same in the two games, for both of them utilize the ForgeLight engine.

Legends of Norrath: Oathbound is a Sony Online Entertainment strategy game in the card convention. Players collect cards and stack their own decks for duels with computer-aided intelligence or live opponents. The whole is based on the realities of the popular EverQuest fantasy universe.

EverQuest II is a follow-up to an immensely popular MMORPG, released five years after the original. It was developed by Daybreak Game Company, a studio which created the whole franchise. The game is set in the land of Norrath, perfectly known to all the fans, which was enhanced with many new locations. The list of changes also includes the character creator: before the beginning of the game, the players can select the race, looks, and gender of their avatar  the statistics and specialization of the character are determined later on in the game. EverQuest II also introduces new means of transportation (you can travel both on horseback and aboard a boat), as well as new events (such as gladiator duels), and the whole gameplay premise has been altered in many aspects; for example, experience can now be gained by peaceful conduct as well  for instance by developing craftsmanship, trading skills, magic abilities, or elements of the inventory. If compared with the prequel, Ever Quest II can boast substantially better graphics, spearheaded by high-resolution textures, complex weather effects, and rich animations.

EverQuest Deluxe Edition is a full version of one of the most popular massivelly multiplayer online cRPG games made by Verant Interactive, in addition to the basic version of the game containing two additions, The Ruins of Kunark and The Scars of Velious.

One of the first MMORPGs, which gained massive popularity all over the world. The game was released in 1999, and in the following years over twenty expansions have been created for it. EverQuest is set in a fantasy world, which we explore as a player-created character. You can choose from a range of races and character classes, which you can combine to suit your preferences. The inspiration for Daybreak Game Company's production was Ultima Online  and although the developers used some tried and tested features in the 3D environment, they also implemented some new ideas. The gameplay consists mostly of exploring of open locations, fighting the encountered enemies, as well as developing the protagonist by gaining new abilities and equipment. Additionally, EverQuest features both main quests and a multitude of side quests. 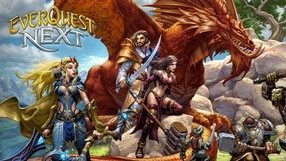 The third installment in the popular MMORPG series, which aims to present a new approach to the franchise. It was developed by Sony Online Entertainment and is distributed in the free-to-play business model. Once again, the players have the opportunity to go the fantasy land of Norrath to learn over 10 thousand years of its history. The developers of EverQuest Next decided to employ voxel structure for the game world and therefore allow the players to shape it to a large extent (by building new cities, drilling underground tunnels, creating items, etc.). The changes were also introduced in the combat mechanics which combine elements of RPGs and arcade games. The role of a story campaign is played by the events called the Rallying Calls that can last for months with thousands of players taking part in them.