Focus Home Interactive has published eight minutes of gameplay from A Plague Tale: Innocence - an action adventure game enriched with stealth elements, which will be available on PC, PlayStation 4 and Xbox One on May 14. On the video below we can see a level not shown before. Amicia, the main character of this production, breaks through the gloomy streets of a medieval French town, overrun by soldiers of the Inquisition and a herd of bloodthirsty rats.

The most striking element presented on the gameplay are obviously the ever-present rodents, whose herds swarm almost everywhere, where the light does not reach. Even in the dark, however, Amicia can distract them by, for example, throwing them bodies from the gallows. Although they are a deadly threat to the heroine, she can also use them for her own purposes, for example to eliminate the guards in her way (whom she can also kill herself quietly).

Moreover, the devs focused on showing the tools that the protagonist will have at her disposal. The list will contains a slingshot and small bombs (we will be able to replenish their supply at any time, if we have sufficient resources). Not without significance will also be a torch, thanks to which we will save ourselves from the furious mass of teeth and tails (making us clearly visible to human opponents). It is worth noting that from time to time the girl will be able to use the workshop and improve her equipment (for example by increasing the capacity of the bag or improving the effectiveness of the tools). 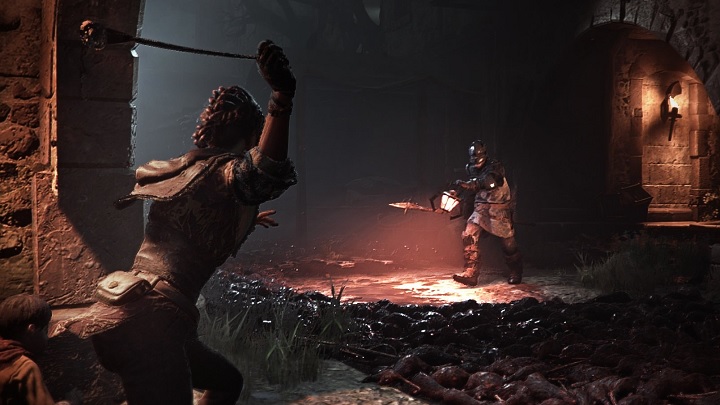 If the stone hits that lamp, within a few seconds only the bones of the soldier holding it will be left.

Work on A Plague Tale: Innocence came to an end at the beginning of April, so the title is already on the last straight before it hits the store shelves. In addition, PC gamers have known the game's hardware requirements for a few days now.