Less than three weeks have passed since the release of Age of Empires 4. The developers at Relic Entertainment do not stop working on their latest creation. Therefore, the schedule presenting the changes that will appear in the game at the turn of the year was published. 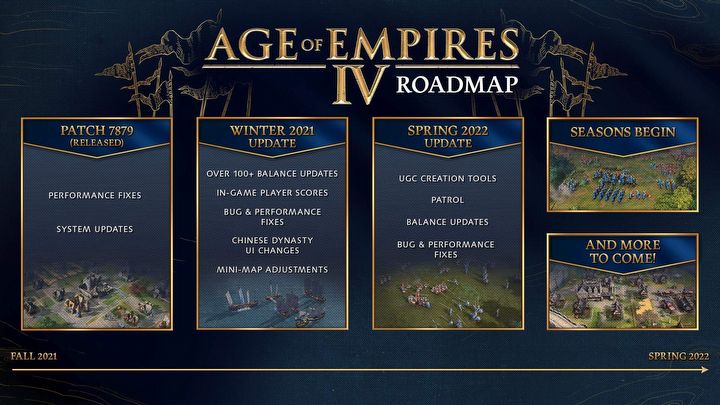 During the winter we are supposed to receive gameplay balance improvements, covering more than 100 different units. For example archers, spearmen and elite crossbowmen will deal more damage to cavalry. There will also be the ability to preview the entire map after a match, as well as leaderboards.

The Chinese Dynasty button and UI will be moved later this year. Thanks to this there will be more space on the screen. The minimap will also change. Improvements will include reducing the size of icons to improve clarity.

In the spring of 2022 AoE 4 will see the release of modding tools. There will also be a ranked season that will last 12 weeks. During its duration, players will be able to compete with each other, gain new ranks and unlock rewards.

According to the developers' announcements, that's not all that will appear in Age of Empires 4, as the game's support period will not end in the spring.

Bobby Kotick Said to Have Hushed Down Scandals at Activision Blizzard; Board Has His Back [UPDATED]