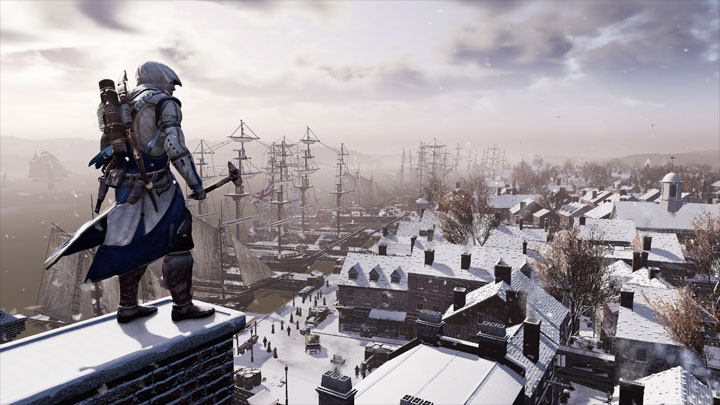 Assassin's Creed III Remastered reminds us how the series used to look like.

Assassin's Creed III Remastered, a refreshed version of the third installment of the popular action game series from Ubisoft, including all of its DLCs, has launched. The new edition also includes Assassin's Creed III: Liberation Remastered For now, only PC, Xbox One and PlayStation 4 version have been released. Owners of Nintendo Switch have to wait until May 21.

The biggest changes in the remastered installments, compared to the originals are the visuals. If you are interested, we recommend watching the above video, prepared by Candyland. It shows a graphical comparison between Assassin's Creed III Remastered and the original PC installment.

In general, the game looks much better. Textures are sharper, lighting is more realistic, objects in the surroundings have more details, and more passers-by move through the streets of cities. New effects such as volumetric fog have also been added. However, some faces look worse, which seems to be caused by changes in the lighting system.

In Assassin's Creed III Remastered the developers didn't limit themselves to refreshing the graphics. The gameplay has also been improved. The new edition added the possibility of whistling in order to attract the attention of opponents and free aim with firearms. The balance of the mission has also been improved.

Many reviews of Assassin's Creed III Remastered have already appeared on the web. The PlayStation 4 edition currently has an average rating of 77% by Metacritic. Below you will find sample scores:

In general, the changes and improvements are praised. Criticism focuses on the fact that despite all this, it's still the same game, which pales when we compared with the latest installments of the cycle.