During the State of Play event, Sony showed a new trailer of the action game Blood & Truth. Sony also announced the release date.

Five Nights at Freddy’s VR: Help Wanted has been announced. The game will be a new installment in the popular horror series. The project was revealed during the State of Play live stream, dedicated to upcoming PlayStation 4 titles.

During today's conference, Apple revealed the Apple Arcade service, enabling us to access over 100 exclusive titles for iOS and MacOS for a monthly fee.

Today, Sony will broadcast the first State of Play event, during which the company will present the latest promo materials of upcoming titles and, hopefully, announcements of new productions. 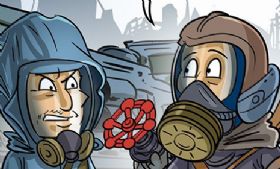 In a recent podcast, CD Projekt RED developers – Philipp Weber and Miles Tost – have shared their experiences during the work on The Witcher 3: Wild Hunt.

The developers of Vampire: The Masquerade - Bloodlines 2 have promised that the PC version of the game will not be available exclusively on any single digital distribution platform.

A user of the WSGF message board has prepared a useful mod for the PC version of Sekiro: Shadows Die Twice, which enables us to disable the 60 fps animation cap.

Chris Avellone: The Outer Worlds' Exclusivity is a Cash Grab

Chris Avellone – the co-founder of Obsidian Entertainment, currently a renowned independent developer – has taken a stance on the deal signed by his former employer with Epic Games Store. He believes that the decision is nothing more than a cash grab.

Hideo Kojima has informed that his upcoming action adventure game Death Stranding is entering a critical development stage. The creator is spending days playing his work on its target platform - the PlayStation 4 console.