Electronic Arts has published a long gameplay from Star Wars Jedi: The Fallen Order. The first ten minutes of the video present a new fragment of Respawn Entertainment's latest work, while the remaining sixteen are a familiar stage, which we could see at this year's EA Play.

Therefore, let's focus on the first part of the published gameplay. Lovers of spectacular lightsaber fights don't have much to look for here. The fragment thing begins with Cal Kestis (the main character) climbing onto the walking steel giant in a spectacular sequence. After a while, the hero manages to get inside the machine after a short "exchange of arguments" with the soldiers of the Empire... and sit at its controls and start wreaking havok in the enemy ranks (in which he is accompanied by his droid companion, BD-1).

Later on, our Jedi encounters Saw Gerrera, a character known from Rogue One: A Star Wars Story>, who introduces him to the details of the problems he has to face. Before Kestis begins his further journey, he approaches the holographic table, through which he can move between the planets; only Kashyyyk can be identified among the globes visible on it - the other three remain a mystery. 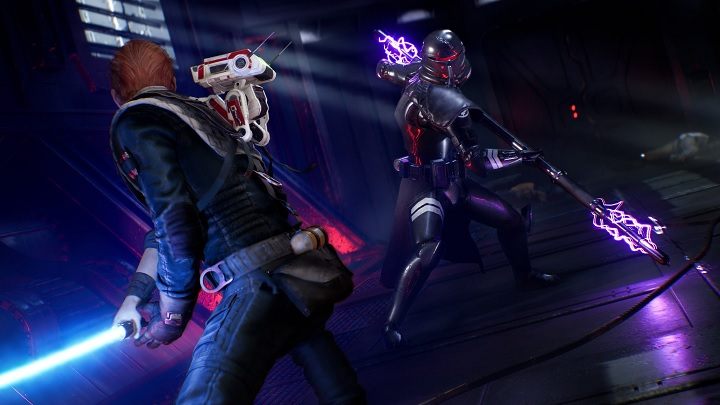 Spectacular duels will not be the only attraction prepared for us by the Respawn Entertainment team.

Star Wars Jedi: Fallen Order is headed for PC, PlayStation 4 and Xbox One, and will debut on November 15, this year.