An extensive gameplay from Star Wars Jedi: The Fallen Order has appeared online. Electronic Arts enabled us to take a closer look at the powerful AT-AT walker that previously appeared on the trailer presented at Microsoft's E3 conference.

Despite the fact that new processors from AMD will hit the shelves only on July 7, the results of the first tests of the Ryzen 5 3600 chipset have appeared on the Internet. The new model is very promising in benchmarks and can compete with more expensive Intel models.

We know the estimated disk space required for Cyberpunk 2077 on PlayStation 4, and the resolution it will use on Xbox One X. The sources of this rumor are PlayStation Store and Microsoft Store, where you can submit a pre-order for the upcoming hit by CD Projekt Red.

In an interview for Game Informer magazine, Respawn Entertainment explained why Star Wars Jedi: The Fallen Order was created on Unreal Engine 4.

In Cyberpunk 2077 players will get a lot of romance options that will be similar to those of the Witcher. But there will be far more of them, and not only heterosexual. Additionally, the game will not have a morality system.

Today, Samurai Shodown made its debut on the market. The first reviews are very positive and it seems that the fans of fighting games have received another hit.

Despite many successes, Microsoft has had its share of slips over the years. In a recent interview, Gates admitted what was the biggest mistake in his career. And it's not about Vista. It's Windows Phone. 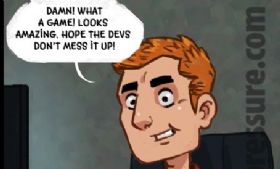 Hope the devs don't mess it...